A Crown in Time by Jennifer Macaire (Book Showcase) 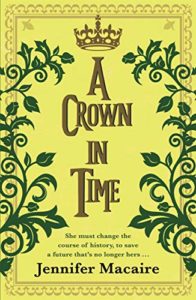 Introducing TEMPUS U, the brand new time-slip series from Jennifer Macaire. From the far future to the distant past, A CROWN IN TIME is the perfect, action-packed read for fans of Jodi Taylor.

Since it was perfected in 2900, time travel has been reserved for an elite, highly trained few. However, on certain occasions, a Corrector is needed to rectify a mistake in the past.
Do your job well, and you’ll go down in history. Fail, and you will be erased from Time . . .
The first in an exciting new time-slip series, from the author of the action-packed Time for Alexander series, Jennifer Macaire. A CROWN IN TIME will have you on the edge of your seat from the very first page . . .

In the far future, a convicted criminal is given a chance at redemption. The Corrector Program at Tempus University is sending Isobel back in time, to the year 1270, to rewrite history.

Her mission? To save the crown of France.

If she follows the Corrector’s Handbook everything should run smoothly. But soon, Isobel finds herself accompanying a hot-headed young noble on his way to fight the infidel in Tunis: a battle Isobel knows is fated to be lost.

Isobel must fulfil her duty, knowing she can never return to her time, knowing one wrong move can doom the future, or doom her to be burned as a witch . . . 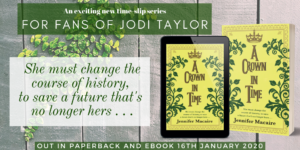 ~~Excerpt ~~
Jean was already perched on the railing, his feet drumming excitedly on the wood, his eyes glowing. ‘Look!’ he cried, pointing toward shore. ‘The Saracens have arrived!’

In the indistinct light of dawn, I could make out a huge crowd of men and horses milling on the beach. I looked to the right. Another small army was camped on the bluff overlooking the harbour. On the left, tents were scattered across the land, and I could clearly see the glitter of light on the metal spearheads.

My head swam and I gripped the wooden railing until splinters dug into my palms. Unexpectedly, my stomach heaved, and I retched over the side of the ship.

‘Are you all right?’ Jean hopped off his perch and put his arm over my shoulders.

‘It’s just nerves.’ I wiped my mouth with a shaking hand. A shiver of fatigue washed through me, so I sat down on the deck.

‘Oh great,’ I said. ‘Malaria. That’s just what we need. I suppose King Louis is going to attack the Saracens?’

‘He’s planning to do that, yes.’ Jean’s face fell. ‘Our ship won’t be fighting, though. We’re going to retreat a way back and keep the king’s ship covered.’

‘That sounds like a sensible idea, don’t you think?’

‘The knights have been getting ready. I can hear the clanging of armour coming over the water. The sound carries well in the early morning. The horses have been kicking the sides of the ships.’

The noise of iron-shod hooves striking the wooden planks was distinct. The knights must be the first ones off. The ship crews, protected from arrows by large wooden panels, manoeuvred the ships backwards towards the beach. The ships carrying the mounted soldiers were simply hollow vessels that the horses surged out of in a tight group down two enormous gangplanks. There were thirteen of these ships, one having sunk on the way to Sardinia.

Our fleet boasted ten of another type of ship, designed for the archers with towers and shields. These, including the king’s own archers on their own special ship, would cover the cavalry’s flanks. The ships holding foot soldiers bobbed around the edges of the battle, searching for an opening to land.

The full force of the king’s army landed that afternoon and drove the Saracens out of the harbour without much trouble. The knights galloped their heavy chargers out of the bowels of the ships onto dry land, the archers rained arrows on the hillside and the foot soldiers charged gamely up the beach.

The Saracens retreated toward Carthage, their fiery horses galloping with their tails held high in the air like flowing flags.

Jean, Charles, and I cheered.

‘What happens next?’ asked Charles, his face pink with excitement.

‘We set up camp.’ Jean sounded morose, disappointed to have missed the action.

‘There will be other battles,’ I said, just as gloomily.

‘We’d best get our things in order if we’re leaving the ship,’ said Charles, ever practical.

I looked out over the water, toward the king’s ship floating so close to ours. All the flags waved jauntily in the hot breeze, and the king sat under his awning and waved his thin white hand at the soldiers on shore. His face was serene, joyful with the painless victory. However, it wasn’t a victory, really. The Saracens had simply wanted to see exactly what kind of an army the French king had brought. Now they knew.

Jennifer Macaire lives in France with her husband, three children, & various dogs & horses. She loves cooking, eating French chocolate, growing herbs and flowering plants on her balcony, and playing golf. She grew up in upstate New York, Samoa, and the Virgin Islands. She graduated from St. Peter and Paul high school in St. Thomas and moved to NYC where she modeled for five years for Elite. She went to France and met her husband at the polo club. All that is true. But she mostly likes to make up stories.
Webpage / Twitter