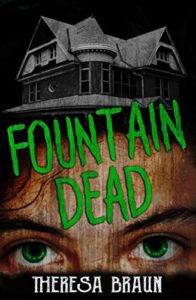 Mark is uprooted from his home and high school in the Twin Cities and forced to move with his family into a Victorian in Nowhere-ville. Busy with the relocation and fitting in, Mark’s parents don’t see what’s unfolding around them—the way rooms and left behind objects seem alive with a haunted past.

Of course, Mark keeps his ghostly encounters to himself, all the while sinking deeper into the house’s dark, alluring, and ultimately terrifying history. As romantic entanglements intensify, the paranormal activity escalates. Past and present come together. Everything is connected—from the bricks in the walls to the hearts beating in their chests, all the secrets of Fountain Dead are finally unearthed. 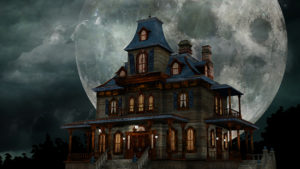 Emma, born in the 1800’s, didn’t have a lifetime of love and happiness. There was a brief period of time she thought she’d achieve her HEA but her life took a grisly turn. Family turned against her and she learned the hard way not to trust anyone.

Mark’s story took place in 1988 when his family moved to Winona and into the Durley house, Emma’s family home. From the start, Mark knew something was off about the house. It was messing with his mind, his sister’s and eventually it turned its attention to others. The house was cursed. Anyone who entered it was prey.

Mark didn’t want to live in the house but a child must live where their parents tell them. His parents were oblivious to the danger lurking in the house but Mark wasn’t. He saw the spirits, humanoid creature, and saw the effects of possession firsthand.

As we watch Emma’s life progress, we see every monumental point in her life was somehow tied to what Mark and his family was living through in present time. At first, the time period/POV’s flip-flopping did mildly annoy me. It was occurring way too rapidly. I actually started taking meticulous notes because I wondered how each moment in the past would have an impact on Mark in his time period. It wasn’t until I was about mid checkpoint that I didn’t mind the flip-flopping speed as much because NOW the puzzle pieces were clicking together and the grand picture was almost revealed.

The link between past and present was mapped out very well and the ending was spectacular. 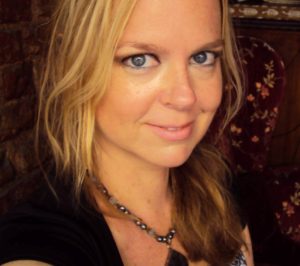 Theresa Braun was born in St. Paul, Minnesota and has carried some of that hardiness with her to South Florida where she currently resides with her two fur babies, who are her creative sidekicks. She enjoys delving into creative writing, painting, photography and even bouts of ghost hunting. Traveling is one of her passions—in fact, her latest adventure took her to Romania for a horror writers’ workshop where she followed in the steps of Vlad the Impaler. She writes horror fiction and the occasional romance. Oh, and she likes to guest blog about writing, television shows, movies, and books, mostly in the horror genre.