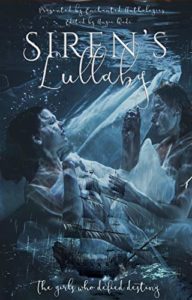 ‘The madness of the eyes is the lure of the abyss.’

Three women are left stranded on a small Island near Sicily, Italy, to starve, but they won’t give up easily. Joining together to fight to survive, they make a deal with a demon of the sea.

The only catch is they must lure ships to the rocks using their voices and sink the ships along with the men aboard.

Three pirates–brothers–who haven’t agreed on much since their mother died get back together for a long journey. They long to rid themselves of the curse placed on them by a sea witch.

An insatiable hunger felt by the seductress sirens and the deadly pirates will join them together in more ways than they could ever have thought. 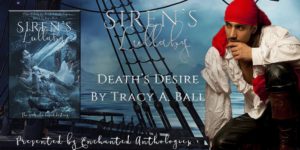 I didn’t know where the others were, but Tristian, Rauel and I were taken to a pen. It wasn’t large or particularly comfortable but a small cave with bars that appeared to have been salvaged from some-long forgotten ship. I imagined lots of things from long-forgotten ships were hoarded in these caves.

Tristian and Rauel belonged to my vanguard. Deadly fighters and trustworthy men. That was, if you considered men who plunder to be trustworthy. I knew enough about them to anticipate what was coming. Tristian was claustrophobic. He hesitated at the cave’s entrance and turned on the siren.

I drew my sword and turned on him. “We all must die sooner or later. Your choice.”

Rauel went into the cave without a backward glance. He had called me unpredictable on more than one occasion.

“Baldassare, I can’t go in there,” Tristian said.

“You can, and you will.” I nudged him with my sword tip.

It was low, almost inaudible. I felt it before I heard it, snaking its way around my heart. My sword arm went limp. Tristian didn’t notice. He, too, was captured by the siren’s magic. Rauel came forward, enchanted, called by this temptress. The bitch. I didn’t understand what she was doing, but I didn’t want her to stop.

All too soon, she did stop. I was sure we looked as stupid as we felt.

“Get in the pen.” Her words were cold, but her eyes were black magic. My member stiffened, not for the first time since I’d seen her.

“There are seven deadly sins,” she said. “I can sing and make you guilty of all of them.” She locked the cage behind us.

“Wait,” Rauel called before she moved away. He didn’t have anything to say. He just didn’t want her to leave.

“Who built this?” He touched the bars.

While he talked, I committed her to memory. I wanted a detailed image when I pampered my erection.

“You are not the first men to make landfall.” She spoke as if he was impertinent for asking.

Tristian knelt, pressing his face against the bars, taking deep breaths. “There are other men here?”

“Not any longer.” She thought a minute, then said to me, “Perhaps, you’ll be next.”

“Then I best get busy.” I nodded my head once in the direction of my crotch.

Her exquisite bottom lip dropped open. It quivered like she had something naughty to say. She came very close to me, reached out to touch me…only she didn’t. Damn. I wanted her to touch me. Her fingers were a wisp away from cupping my groin. Oh, please…

“I can sing all seven sins.” This time, she did not look back. 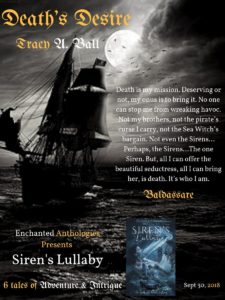 (review request of “Death’s Desire” submitted by the author, Tracy A. Ball,  for an honest critique)

Death’s Desire conveyed beautifully the enticing power of a siren’s call, the magnitude of their power, and the lure of their body.

As we know from mythology, sirens are irresistible and bloodthirsty beings. Tracy capitalized nicely on illustrating their seductiveness and their insatiable hunger to feed on victims that cross their path. She also allowed readers to witness their capacity for the emotion – love.

Twist and turns, love and death, Death’s Desire could’ve went on to a full-length novel. As Death’s Desire came to a close, I came to realize I didn’t want Baldassare and the sirens’ story to end. 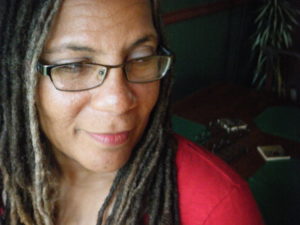 Novelist, Reviewer, Content Editor, Blogger, T-shirt Wearer, and Professional Snacker; Tracy A. Ball is a native Baltimorean and a veteran West Virginian whose family is blended from three cultures. She has opened her home to foster children, drug addicts, AIDS victims and anyone who needed an assist. She knows people who have committed murder and people who have dined with the Pope.

Which is why she writes sweet stories about tough love…and takes naps.