All I Want for Halloween by Marie Harte (Book Showcase) 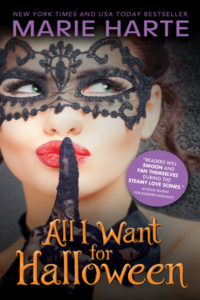 TONIGHT, SHE PLANS TO LET GO.
Dressed up and anonymous, Sadie Liberato feels powerful, sexy and free. Where better to lose herself than a masked party?

Gear Blackstone’s cheating ex and scheming best friend have managed to spin his life into a serious downward spiral. At least with a mask on he can cut loose for one night. And cut loose he does—with the sexiest, snarkiest chick he’s ever met.

After a scorching-hot encounter, Sadie and Gear are desperate to find each other in real life. But can the heat last when the masks come off? 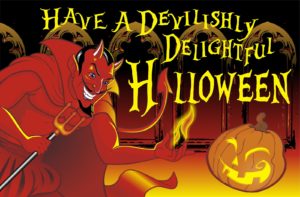 The music’s tempo jolted the partyers to new heights of enthusiasm.

“Great DJ,” Devil said, his foot tapping to the beat.

She found herself doing the same. “No kidding.” She eyed the tiny corn dogs on his plate. He had half a dozen. She wondered if he’d miss one… “Hey, is that B-Man over there?” she asked.

When he turned his head, she stole an appetizer off his plate and shoved it in her mouth. Oh yeah, Elliot would be thrilled to see her display her “house manners” in public.

The devil turned back to her. “Not him.” He frowned at his plate, then at her full mouth. “Did you just steal my food?”

“Nope,” she answered around a mouthful.

He stared at her for a moment, then burst into laughter. It was a full-bodied laugh, holding nothing back. Charming and real. She put Devil at the top of her list.

She swallowed, wishing she had something more to drink. As he finished off his plate, he glanced at her clean one, then at her. When he sighed and handed her his beer, she took it gratefully.

“No backwash, I promise.” She opened her mouth to show him hers was clean, then downed half the bottle. “Damn, that was good.”

She moved to go, but he grabbed her arm. They both paused. Together, they glanced down at his large hand on her wrist, and he dropped her arm. “Ah, that’s okay. You stay here. I’ll get you something. Beer? More chow?”

He left, and she watched his progress as he cut a swath through the crowd. Yes, the devil made his own path. This time, no one bothered him as he returned posthaste. To her surprise, she was glad. The guy smelled good, a hint of subtle cologne that went straight to her head. He had a kickin’ body and a great smile. But that air of Don’t fuck with me really turned her on—ah, made her amenable to his presence.

Talk about a wordy mouthful. At the thought, she found herself glancing down his body to see what else might be a mouthful.

Jesus, Sadie. Get your head out of the gutter, girl.

“You okay?” Temptation leaned closer. “You look a little flushed.”

“You can tell in this lighting?” she teased, trying to get it together.

“Good point.” He handed her a beer, placed his own down on the table, and then put a plate overloaded with goodies on top of their empties. “This is to share. To share,” he said slowly.

“Yeah, yeah. Man, I’m starved.” She fell on the plate as if the Russians were coming.

To her amusement, he fought with her for the cheese curls as much as for the mini egg rolls, and they devoured the snacks in good company.

They talked with their mouths full, making fun of the drunken genie as well as several unsuccessful hookups on the dance floor.

“Oh, now that had to hurt,” the devil said. “Rejected by a zombie and her warty witch friend.”

He shrugged. “You have a sword. I have a pitchfork…somewhere. I think I left it by the bar.” He glanced across the room. “But hey, I have no plans to tangle with your brother. I’m here to sin until this thing is over. Nothing else, and no fights.” He paused, and she swore he added something else under his breath.

At that moment, her brother appeared in the crowd, his gaze searching.

She took Devil by the waist and turned him, noticing how he tensed but ignoring it. “Sorry. I’m having fun not mingling, and my brother is right over there looking for me.”

He relaxed and glanced over his shoulder. “Which one?”

“See the Phantom? He’s a pain in my ass, much as I love him. I didn’t want to come to this tonight, you know.”

“Yeah? Me neither.” He stayed where he was, still watching the dance floor. “Uh-oh. He’s looking over here.”

“Crap, crap, crap. This is a primo spot!” She did what any smart woman in her situation would do. She turned Devil so he completely blocked her from Elliot. “I need to blend in. Work with me, would you?”

She wrapped her arms around his thick neck and dragged him down for a kiss.

At the taste of his lips against hers, she shuddered, not having expected he’d taste better than his beer, or that up close and personal he’d smell like man and sex and chocolate. Chocolate?

Jesus, she must have had too much to drink.

Then he dragged her closer and deepened the angle of their kiss.

Sadie forgot about her brother, about the last crab cake on the plate, about how much she didn’t want to be at the party.

And fell into the arms of a man who kissed like the devil himself. Award-winning author Marie Harte has been writing professionally since 2005. She’s both a NY Times and USA Today bestselling author and has written over 100 books and counting. Marie writes books with heat, humor, and Harte. ♥

She writes independently and for several publishers, to include Sourcebooks and Entangled. Though currently writing contemporary romance, she also writes paranormal and romantic suspense. Basically, everything romance with a touch of spice.

Before turning to writing full-time, she earned a B.A. in English from Pennsylvania State University and spent several years in the United States Marine Corps as a communications officer.

Marie currently lives in Central Oregon with her family. There’s nothing she likes more than finding a good book to read and a great cup of coffee to drink.