Wolf of the Tesseract by Christopher D. Schmitz (Book Review) 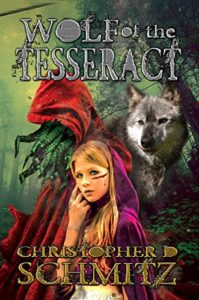 After merging with her copy from an alternate reality, Claire must work with an interdimensional soldier in order to stop a warlock from shattering the laws of existence. As they flee his wrath, she must decide if these romantic feelings for her guardian belong to her or the alternate-self whose soul suddenly inhabits Claire’s mind.

Zabe, the only remaining member of the royal Guardian Corps escaped the warlock’s conquest of the Prime Dimension and wages a one-man resistance. As he sneaks through an enemy camp he discovers they plan to use their sorcery to annihilate all the aligned planes of reality. To stop it, Zabe must break the forbidden dimensional barriers, reach Earth, and hide the key to the dimensional rifts. If he fails and the Warlock acquires the prize, it could spell the end of all existence.

After a dimensional shift, Zabe discovers the key is really a human woman: a college student named Claire Jones whose blood holds the ability to unlock cataclysmic power. The enemy seeks her desperately, yet Zabe and Claire fight–knowing that her blood could rip open a cosmic fissure if even the slightest detail of their plan goes awry.

Within the first few minutes of meeting someone, you know if you’re going to like them or not. You get a sense of their attitude, personality, and take note of how they interact with others. Maybe their facial gestures speak to you more loudly rather than their lack of action. For instance, a quiet/shy person tends to smile coyly, silently laugh. Whereas an overly cocky person might fold their arms, look annoyed, and give off a sense they don’t want to be there. In a nutshell. it’s the smallest things that sometimes can make or break a budding relationship.

I treat a new book like I treat meeting a new person because, really, that’s what I am doing — meeting a new person or group of new people. In the first few pages/chapters, I get a sense if a book is going to be a hit or miss (for me). If I am going to enjoy its company and possibly want to revisit it again. Rarely does my opinion change the longer I read a tale unless something epic happens to blow my mind.

When I began Wolf of the Tesseract, it was apparent that Christopher D. Schmitz meant to make an everlasting impression on me, the reader. This science fiction story literally had an explosive start and the action continued on until the final chapter.

Christopher’s imagination seemed limitless, his plot flawless, and the ending left it wide open for a highly-charged sequel.

The only thing missing from Wolf of the Tesseract was a terminology page — a point I made to Christopher on 12-2-16. With all the science fiction lingo, unworldly creatures, and/or beings, I thought the readers would benefit from a cheat sheet. He absolutely agreed. His exact words were this, “You are very right. I’ll make sure that future versions of the book include that.”

Sci-fi/fantasy readers, grab this book and be prepared to encounter fire demons, werewolves, snake creatures, warlocks, and huge ass worms. Basically, everything you love about the paranormal world and much, much more!

Christopher D Schmitz is an author of fiction and nonfiction as well as a regular blogger. He lives in Minnesota with his family in a small town where he’s mainly known as “the local bagpiper: Tormentor of the Neighborhood”. He writes as often as possible in his spare time and works with area youth. Even though he tends to write mainly SF/F/H style titles, he occasionally dabbles with nonfiction.

Favorite me at Smashwords

3 Responses to Wolf of the Tesseract by Christopher D. Schmitz (Book Review)