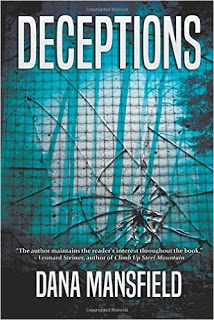 Jack Petrov, lead singer of a successful rock band, is spending the Thanksgiving weekend with his wife and children in the Poconos. He has been out of the limelight for two years after a terrible car accident that resulted in the deaths of two of his children. Traveling with the family is the children’s nanny, Penny Shepherd. Penny and Jack have been best friends since their days at Princeton. After a verbal fight with his wife, Jack orders Penny to drive him after he gets buzzed in the lodge’s bar. Before they can return, they are abducted by kidnappers hired by someone called the Employer. Although treated okay at the beginning, their treatment worsens as the Employer demands information from Penny. After the truth is revealed, the Employer leaves after a final goodbye and Penny and Jack are left to try and survive, still as captives.

(review request submitted by the author for an honest critique)
I must warn you, before you decide to purchase Deceptions, you are in for page after page of torture. The gruesome acts against Penny were more brutal than anything Jack endured.
Why, you may ask? Because she took the brunt of any defiance by him and because the mastermind behind their abduction hated her with a passion.
Penny suffered blows from a sledgehammer, sexual assaults, burns, and the grisly list goes on. It was very difficult to read. Yes, Dana described it all in much detail which takes talent. On the other hand, the book was nearly start to finish with one deplorable act after another.
For her writing capabilities, I do respect the imaginative skill behind such an emotionally draining story. However, for me, all the violence became too much to take.
I, like Jack and Penny, wanted a reprieve from the torture. The times they did have a moment to recover, they pondered who was the mastermind — the Employer. For the boss, I was hoping I’d be surprised who’d be unveiled. Unfortunately, I wasn’t.
I’m sure you won’t be shocked who comes to visit them.
I also want to make note Deceptions ends with a cliffhanger. I can’t imagine how much more these two can endure. I almost afraid to find out.
Heart Rating System – 1 (lowest) and 5 (highest)
Score: ❤❤❤1/2
Print Link (Amazon)
Kindle Link 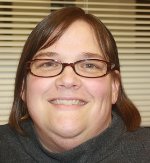 I was born, raised, and still live in northwest Iowa. I enjoy the intricacy and problem solving of creating stories and thankful to have achieved remission from leukemia to have the chance to see my literary dreams come to fruition. I teach reading to at-risk high school students and spend my time writing, watching cooking and clothing competitions on television and being an overprotective mom to my two cats, Boots and Joey.

Feel free to visit my website where you can find more of my writing – http://www.danamansfield.com