Theirs to Cherish by Shayla Black (Book Review) 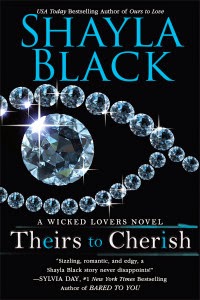 The perfect place for a woman on the run to disappear…

Accused of a horrific murder she didn’t commit, former heiress Callie Ward has been a fugitive since she was sixteen—until she found the perfect hideout, Club Dominion. The only problem is she’s fallen for the club’s Master, Mitchell Thorpe, who keeps her at arm’s length. Little does she know that his reasons for not getting involved have everything to do with his wounded heart…and his consuming desire for her.

To live out her wildest fantasies…

Enter Sean Kirkpatrick, a Dom who’s recently come to Dominion and taken a pointed interest in Callie. Hoping to make Thorpe jealous, she submits to Sean one shuddering sigh at a time. It isn’t long before she realizes she’s falling for him too. But the tender lover who’s slowly seducing her body and earning her trust isn’t who he claims…

And to fall in love.

When emotions collide and truths are exposed, Sean is willing to risk all to keep Callie from slipping through his fingers. But he’s not the only man looking to stake a claim. Now Callie is torn between Sean and Thorpe, and though she’s unsure whom she can trust, she’ll have to surrender her body and soul to both—if she wants to elude a killer…

Was this book sexy as hell? Yes.
Did the love scenes make my heart race, certain parts of my anatomy ache? HELL YES!
And folks, I am not ashamed to admit the scenes between Sean, Callie, and Thorpe are panty wetters.
The scenes were so hot, I almost forgot there was a plot happening in the background.
If you read nothing else from her – READ THIS!