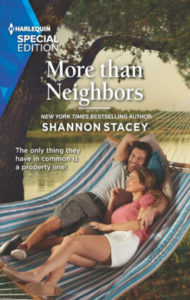 The only thing they have in common is a property line!

He’s trying to uncover his past.
She’s hoping for a brighter future.

Cam Maguire is in Blackberry Bay to unravel a family secret. Meredith Price has moved next door with her daughter. He’s unattached. She’s a widowed single mom. He’s owned by a cat. She’s definitely team canine. All these neighbors have in common is a property line. One they cross…over and over. And Cam thought he knew what he wanted—until his family’s secret changes everything.

“Is that our new house, Mommy?”

Meredith Price might have sat in her sporty SUV, strangling the steering wheel with white-knuckled fingers, until the sun went down if not for the tiny voice from the back seat.

“Yes, honey.” She killed the engine and unfastened her seat belt. Knowing that was the signal they were getting out of the car, the small white dog that had been napping next to Sophie leaped between the seats and into her lap.

Meredith hadn’t done the math, but she was pretty sure their new home was smaller than the garage area of the six-thousand-square-foot home they’d left behind. “It’s the perfect size for the two of us.”

Oscar yipped, as if to remind her there were three members of the Price family, and she tried to keep the fluffy bichon frise still long enough to clip his leash onto his collar. “Be still, Oscar.”

“I want to get out,” her daughter whined.

“Hold on a second, Sophie. We can’t open the doors until Oscar’s leash is on.” She heard the frustration in her voice and took a long, slow breath. “Wait for me to open your door, okay?”

She couldn’t blame either of them for being anxious to get out of the car. The road trip from California to New Hampshire had been too much for a six-year-old and an energetic dog, even with more stops than Meredith had planned for.

Flying out and paying to have the car shipped probably would have made more sense, but driving cross-country had seemed like a grand adventure at the time. It had been an adventure, all right, though grand probably wasn’t the word she’d use for it.

Once she’d managed to get Oscar on the leash, she stepped out of the car and set the little dog on the ground. He immediately sprinted to the grass and lifted his leg, and Meredith heard the car door slam as Sophie got out. Within seconds, her daughter’s hand was tucked in hers as they both stared at their new home.

Forcing her expression to relax into a smile, she looked down at the sweet face that was a younger version of her own. They had the same long, thick dark blond hair and oval faces with noses that were just a little too small. “Nothing, honey. I’m just tired because that was a very long drive.”

“I’m not scared, silly.” She lied to her daughter because it was easier than admitting the truth.

Scared might be a strong word, but the anxiety and doubt that had been her constant companion since leaving San Diego only intensified as they walked to the front door.

The home she’d bought from three thousand miles away based on nothing but a video tour, her gut instinct and hazy, warm memories of growing up happy in Blackberry Bay, New Hampshire.

She punched the code the real estate agent had given her into the keypad next to the door. When the lock disengaged, she took another deep breath—they never really helped—and turned the handle.

Sophie bolted inside and, as soon as the door was closed and Meredith unclipped his leash, Oscar scrambled after her.

Meredith leaned against the closed door and breathed in the light scent of citrus, probably from whatever the cleaning service had used, and allowed herself to savor this moment.

This was the place she’d chosen to start over. Only four years old, the house was a small, single-story contemporary that was totally open concept except for the two bedrooms on the end, with a bathroom between them. The cream walls, hardwood floors and high-end finishes aligned perfectly with her taste, and because it was meant to be a summer getaway, it was furnished for comfort, with an overstuffed sofa and chairs in a pale blue.

The previous owners hadn’t wanted to deal with emptying out what had been a third home for them, so Meredith had been able to negotiate a turnkey price that included all the furnishings, right down to the comforters the owners had chosen to complement the bedroom wall colors—though she’d brought new sheets with her. She’d had her hands full with the San Diego house and had been happy to avoid having to choose between picking out furniture for a house three thousand miles away or waiting until they arrived.

It hadn’t been all practicality on her part, though. As soon as she’d clicked on the listing, she’d been interested in the house, but it was the interior shots that had her making an offer. The existing decor was all about peace and relaxation and light, and she’d fallen in love instantly.

It wouldn’t be a summer getaway for her and Sophie, though. It would be their home, and judging from Sophie’s excited chattering to Oscar, she’d chosen well.

“Wait,” she called when she spotted her daughter reaching for the handle of the sliding door leading out to the deck. “Oscar needs to be on his leash before you open any doors.”

Sophie was practically dancing in anticipation as she waited, and Meredith grinned at her before clipping Oscar’s leash on and pulling open the sliding glass door. This was the most animated she’d seen her daughter since Devin had died in a car accident two years ago, leaving her without a husband and Sophie without her beloved Daddy.