“The Murders at Astaire Castle,” “The Lady Who Cried Murder,” and “Twelve to Murder” by Lauren Carr (3 Book Spotlight) 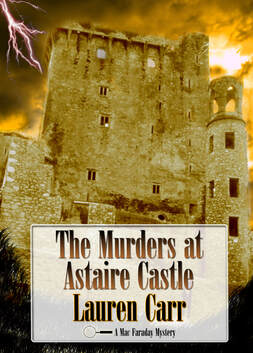 “So much fun to read!  The castle seemed foreboding. The rumors of the ghost dog, werewolves, and more made more plausible in light of the murders. Is it enough to make even detectives reconsider?  Is it all about the missing book or is the real motive money?” – review by Mystery Suspense Reviews

“The Murders at Astaire Castle is a page-turner that resounds with Halloween season chills and thrills, along with plot twists as jagged as the shoreline of Deep Creek Lake.” – review by David Kinchen, Huntington News

Never tell Mac Faraday not to do something.

Spencer’s police chief, David O’Callaghan, learns this lesson the hard way when he orders Mac Faraday to stay away from the south end of Spencer’s mountaintop—even though he owns the property. It doesn’t take long for Mac to find out what lies on the other side of the stone wall and locked gate, on which hangs a sign warning visitors to Keep Out!

Topping the list of the ten most haunted places in America, Astaire Castle is associated with two suicides, three mysterious disappearances, and four murders since it was built almost a century ago—and Mac Faraday owns it!

In spite of David’s warning, Mac can’t resist unlocking the gate to see the castle that supposedly hasn’t seen a living soul since his late mother had ordered it closed up after the double homicide and disappearance of Damian Wagner, a world-famous master of horror novels.

What starts out as a quick tour of a dusty old castle turns into another Mac Faraday adventure when Astaire Castle becomes the scene of even more murders. Mac is going to need to put all of his investigative talents to work to sort out this case that involves the strangest characters he has run into yet—including a wolf man. No, we’re not talking about Gnarly. 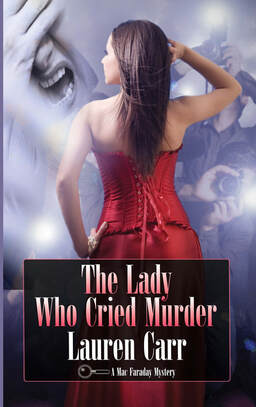 “I recommend this book to all mystery lovers! The Lady Who Cried Murder was another heart-stopping thriller! While the mystery and the road to it’s solution was amazing, I truly enjoyed the cast and characters (they feel like family)! Another great hit and I look forward to reading the next installment of Mac Faraday and his gang and what kind of drama they end up in!” – review by Debbie Hill, Miss Book Lovers

Determined to get her pretty face in front of the cameras, Khloe Everest fakes an abduction only to make a grand entrance in the midst of a press conference held by Spencer’s Police Chief David O’Callaghan.

Three years later, after failing to catapult her notoriety into a long-lasting celebrity, Khloe Everest returns to Spencer upon her mother’s sudden death and seemingly finds another weapon to propel herself into the spotlight. Unfortunately, someone kills her before she can make this entrance.

In Lauren Carr’s sixth Mac Faraday Mystery, Mac and his friends come up against reality stars, politicians, has-beens, and wannabes. Mac also finds himself face-to-face with an old foe from his past who had managed to escape arrest during their last encounter. Now, Mac sees that his adversary has only become more powerful, and dangerous, with the passage of time.

Intent to not let this killer escape again, Mac and his friends need to put all of their talents together to put a stop to a cold blooded lady killer. 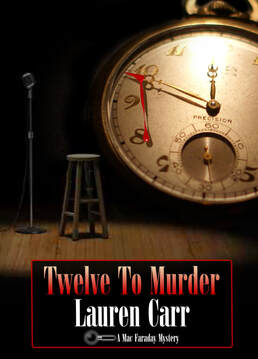 “Twelve To Murder is a clever blend of comedy, mystery, and sappy love story. Lauren Carr does a good job of moving the quirky storyline along nicely with an abundance of witty dialogue.  And you have no idea who the good guys are and who the bad guys are until the end.” – Review by Every Free Chance Book Reviews.

“This suspenseful book was filled with twists, turns, and lots of action! The Mac Faraday series is an amazing read for a mystery lover, but Twelve to Murder can stand alone if you have not read any other books in its series. Lauren definitely knows how to bring you into the story and leaves you wanting more!” – Review by Debbie Hill, Miss Book Lovers

Two people are brutally murdered in their summer place on Deep Creek Lake. Suspected of the murders, former child star and one-time teenybopper idol Lenny Frost takes innocent bystanders hostage in a local pub and demands that Mac Faraday find the killer. Can Mac save the hostages and himself from the wrath of the enraged has-been by piecing together the clues in less than twelve hours, or will it be a fatal last call at the stroke of midnight?