“Old Loves Die Hard,” “Shades of Murder,” and “Blast from the Past” by Lauren Carr (3 Book Spotlight) 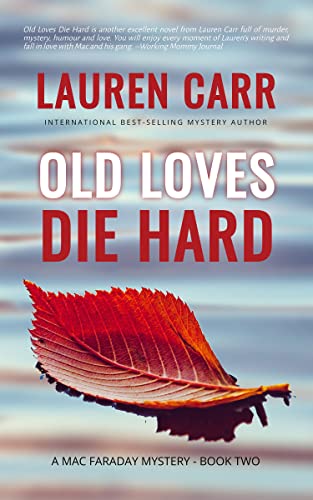 “The plot gave a touch of crime drama to this cozy without losing the cozy charm. … There is suspense and twists that keep the pages turning. … I think Ms. Carr is just hitting her stride and I suspect that we shall see each new book surpass the last.” — review by Ariel Heart, Mystery and My Musings

“As in any good who-done-it, there are red herrings and plot complications in Old Loves Die Hard and fans of mysteries and police procedurals will get a kick out of Lauren Carr’s books.” – review by David M. Kinchen, Huntington News

In Old Loves Die Hard, Lauren Carr continues the rags-to-riches story of Mac Faraday, an underpaid homicide detective who inherits two-hundred-and-seventy million dollars and an estate on Deep Creek Lake, Maryland, from his birth mother on the day his divorce becomes final.

Mac is settling nicely into his new life at Spencer Manor when his ex-wife Christine shows up—and she wants him back! Before Mac can send her packing, Christine and her estranged lover are murdered in Mac’s private penthouse suite at the Spencer Inn, the five-star resort built by his ancestors. The investigation leads to the discovery of cases files for some of Mac’s murder cases in the room of the man responsible for destroying his marriage. Why would his ex-wife’s lover come to Spencer to dig into Mac’s old cases?

With the help of his new friends on Deep Creek Lake, Mac must use all of his detective skills to clear his name and the Spencer Inn’s reputation, before its five-stars—and more bodies—start dropping! 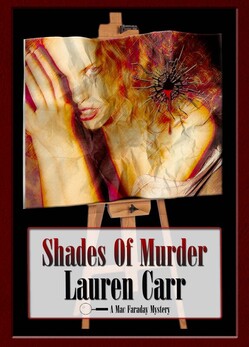 “Being favored by the rich and powerful often has its own drawbacks. Shades of Murder is another Mac Faraday mystery from Lauren Carr as she follows Mac as he finds himself once again the benefactor of yet another inheritance. A riveting mystery with plenty of twists and turns, Shades of Murder is very much recommended reading, not to be missed.” – review by William Buhle, Midwest Book Reviews

“Shades of Murder is a fascinating, intricately woven mystery that has a number of engaging characters looking into two cases that would seem to have nothing in common. …This is a most entertaining entry in this series, made all the more so by the wonderful inclusion of Gnarly and Irving, Mac’s dog and Gates’s black and white cat, who meet during the course of the story.” – review by Mysterious Reviews

Book Description:
Question: What do you get the man with everything?

Answer: When that man is the heir of the late mystery writer Robin Spencer, retired homicide detective Mac Faraday, you get him cold case to solve.

In Shades of Murder, Mac Faraday is once again the heir to an unbelievable fortune. This time the benefactor is a stolen art collector. But this isn’t just any stolen work-of-art—it’s a masterpiece with a murder attached to it.

Ilysa Ramsay was in the midst of taking the art world by storm with her artistic genius. Hours after unveiling her latest masterpiece—she is found dead in her Deep Creek Lake studio—and her painting is nowhere to be found.

Almost a decade later, the long lost Ilysa Ramsay masterpiece has found its way into Mac Faraday’s hands and he can’t resist the urge to delve into the case.

A world away, in Pittsburgh, Pennsylvania; former JAG lawyer Joshua Thornton agrees to do a favor for the last person he would ever expect to do a favor—a convicted serial killer.

The Favor: Solve the one murder wrongly attributed to him.

Joshua finds an unexpected ally in Cameron Gates, a spunky detective who has reason to believe the young woman known to the media only as Jane Doe, Victim Number Four, was the victim of a copycat. Together, Joshua and Cameron set out to light a flame under the cold case only to find that someone behind the scenes wants the case to remain cold, and is willing to kill to keep it that way.

Little do these detectives know that the paths of their respective cases are on a collision course when they follow the clues to bring them together in a showdown with a killer who’s got a talent for murder! 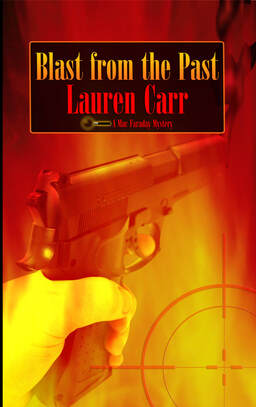 “Blast from the Past is a well-developed story full of intrigue that moves at a brisk pace. The characters are interesting, the villains varied, and the action is as quick as the humor. I have a feeling any of Lauren Carr’s mysteries would be pleasurable distractions, as well as entertaining.  Very Highly Recommended.” – Review by Lori L., Softly She Treads

“I must say, I truly enjoyed reading this book! I found myself waking up slightly early for work just to finish a couple chapters! Not only was this book captivating, I found myself laughing at Gnarly, the ever so lovable and rambunctious German Shephard! I look forward to reading the next book by Lauren Carr!” – Review by Debbie Hill, Miss Book Lovers

Book Description:
In this fourth mystery on Deep Creek Lake; Mac Faraday finds himself up to his eyeballs in mobsters and federal agents.

After an attempted hit ends badly with two of his men dead, mobster Tommy Cruze arrives in Spencer, Maryland, to personally supervise the execution of the witness responsible for putting him behind bars—Archie Monday!

Mac Faraday believes he has his work cut out for him in protecting his lady love from one of the most dangerous leaders in organized crime; but when bodies start dropping in his lakeshore resort town, things may be hotter than even he can handle. 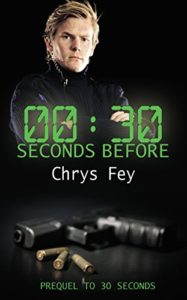 Blake Herro is a cop in the Cleveland Police Force. Ever since he was a child, he wanted to do right by the city he loved by cleaning up the streets and protecting its citizens. Red, a notorious mobster, has other plans.

On a bitter December night, ten police officers are drawn into a trap and killed by Red’s followers. Blake wants to bring down the Mob to avenge his fallen brothers and to prevent other cops from being murdered. Except the only way he can do that is by infiltrating the Mob.

Every minute he’s with these mobsters he’s in danger. Around every corner lies the threat of coming face to face with a gun. Will he make it out of the Mob alive, or will he be their next victim?

Blake’s gaze continued to scan the area. Too many officers needed help. Blake strained his eyes to see if the nearest officer was still breathing, but the darkness and flashing lights obscured his vision.

Dread was ripe in his veins, twining his intestines into knots. The assailants who attacked the officers could be lurking nearby, watching and putting him in their sights. Being out in the open with nothing but his Kevlar vest as protection was not where he wanted to be, but the officer he was helping would bleed out if he moved.

Blake studied the officer. His lips were an unnatural shade of blue. He was shivering from the frigid December night as well as blood loss.

“Did you see them?” Blake asked. “Do you know who did this?”

Blake leaned forward, bringing his ear to the officer’s mouth. “What was that?” 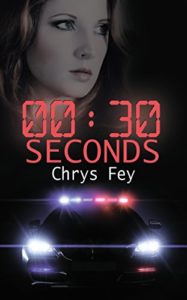 When Officer Blake Herro agreed to go undercover in the Mob, he thought he understood the risks. But he’s made mistakes and now an innocent woman has become their target. He’s determined to protect her at all costs.

The Mob’s death threat turns Dr. Dani Hart’s life upside down, but there is one danger she doesn’t anticipate. As she’s dodging bullets, she’s falling in love with Blake. With danger all around them, will she and Blake survive and have a happy ending, or will the Mob make good on their threat? 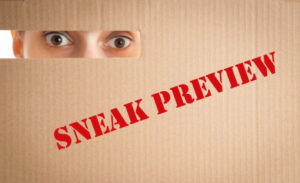 She panted with fear. What if they see the chest? What if we get caught? What if my breath stinks and I’m breathing right into Officer Hottie’s face? She shut her mouth and let oxygen flow through her nose.

Her eyesight slowly adjusted to the darkness and she could see Officer Herro’s silhouette. His head was turned and he was listening to the thuds of heavy boots getting louder; the intruders were coming their way.

Then the thunder of footsteps sounded right next to them. “There’s no one here, Red,” someone announced.

“Look for documents,” a man ordered, who Dani could only assume was Red. “I want the name of the person I’m going to kill.”

A moment later, there was a reply. “All the mail is addressed to a Dr. Hart.”

Hearing her name said aloud by one of the men who had ransacked her place made her want to gasp. Her mouth fell open and her breath was reversing into her lungs, but before she could make a sound, Officer Herro lowered his lips to hers, silencing her. Stunned, she could only lie beneath him with her eyes wide and her body tense. She couldn’t believe he was kissing her. She wanted to push him back, but knew if she did he might hit the inside of the chest, giving away their hiding place. That was when she realized he was kissing her so she wouldn’t gasp.

She let her body relax. After her initial shock faded, she was able to feel his lips. They were comforting and caused a reaction deep inside her. She couldn’t stop her lips from reacting to his. It was an innocent connection, a soft touch of lips. Until his hand slid from her shoulder to her neck and the kiss deepened into something else. 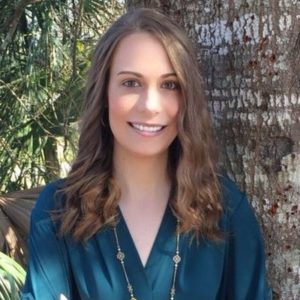 Chrys Fey is the author of the Disaster Crimes Series, a unique concept blending romance, crimes, and disasters. She’s an administrator for the Insecure Writer’s Support Group, running their newsletter and book club. She’s also an editor for Dancing Lemur Press.

Fey realized she wanted to write by watching her mother pursue publication. At the age of twelve, she started her first novel, which flourished into a series she later rewrote at seventeen.

Fey lives in Florida and is always on the lookout for hurricanes. She has four cats and three nephews, both keep her entertained with their antics.