The day of the biggest baseball game of the season is here, but Gigi the giraffe and her teammates might not make it – their team’s bus has no driver! Can Gigi come up with a plan to save the day? 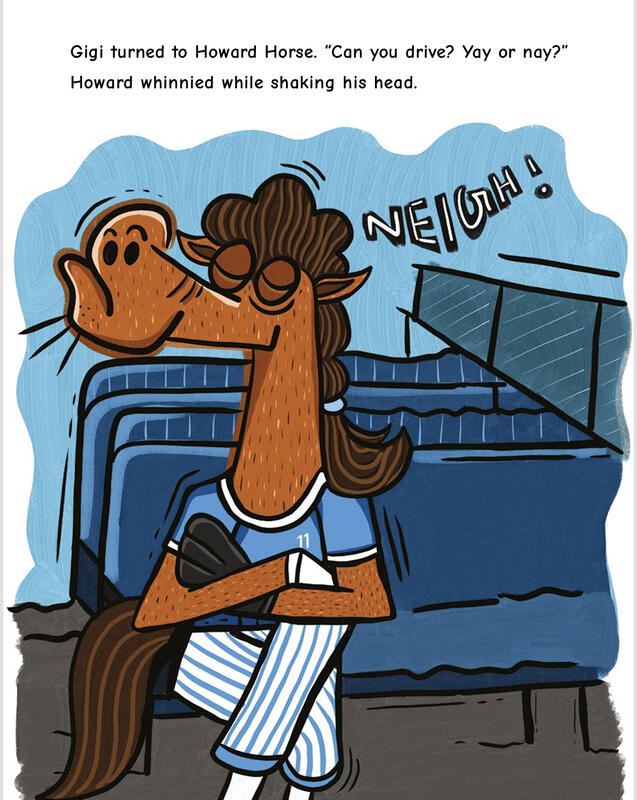 What a fun cover! Each animal had its own personality/expression, which I found delightful. The inside contents were just as spectacular. We loved Gigi Giraffe. Their morning routine resembles many city children who have an early game to attend and make a mad dash to catch the bus. However, I’m sure when your child reaches the bus, their driver is there. Thank goodness for that!

In Hoo’s Driving the Bus by Nikki Estridge, the bus driver had an emergency. Animals/ball players were frantic. If they don’t find a driver soon, they’ll be late for the game. This means they would forfeit the biggest game of the season. EEK!

Gigi Giraffe asks for a volunteer. Each teammate declined to drive in a way fitting for their animalistic nature. For example, the cat was “purr-fectly petrified” to drive. The dog stated they were “barking up the wrong tree,” asking him to take the wheel.

Gigi Giraffe was left with no choice but to drive the bus. Oh, my goodness, Gigi Giraffe’s driving was terrible, which means kids will most assuredly laugh during the driving parts. The animal faces will amuse your child; they did mine. We liked Howard Horse and the frightened pig the most.

Gigi Giraffe’s parking skills were no better than their driving skills, which caused my youngster to laugh (again). Hoo’s Driving the Bus had my daughter smiling for almost the entire book. They asked if I could buy it. I think I shall! (Note: We were given a reviewer file)

The illustrations by Syama Mithun elevated the already humorous story.

Whether your child is a listener or an active reader, I encourage you to share Hoo’s Driving the Bus by Nikki Estridge. I plan on recommending this book to all my parenting groups for children two years and up. Nikki Estridge is an American actress, writer, director and producer. She played collegiate softball for the University of Tennessee Lady Volunteers and graduated with high honors.

As an advocate for autism awareness and a person of multi-ethnic background, diversity, inclusion and equality are of the utmost importance to Nikki. She is very committed to her work with various charities and support networks.

Nikki is a sixteen-time IMDb-qualifying festival award winner most notably for her comedy short, ‘Don’t Make It Awkward,’ which she wrote, directed, produced, cast and starred in. Nikki is best known for her roles on Queen Sugar, Law and Order: SVU, and House of Cards. She is also the author of soon-to-be-published children’s book ‘Hoo’s Driving The Bus?’.