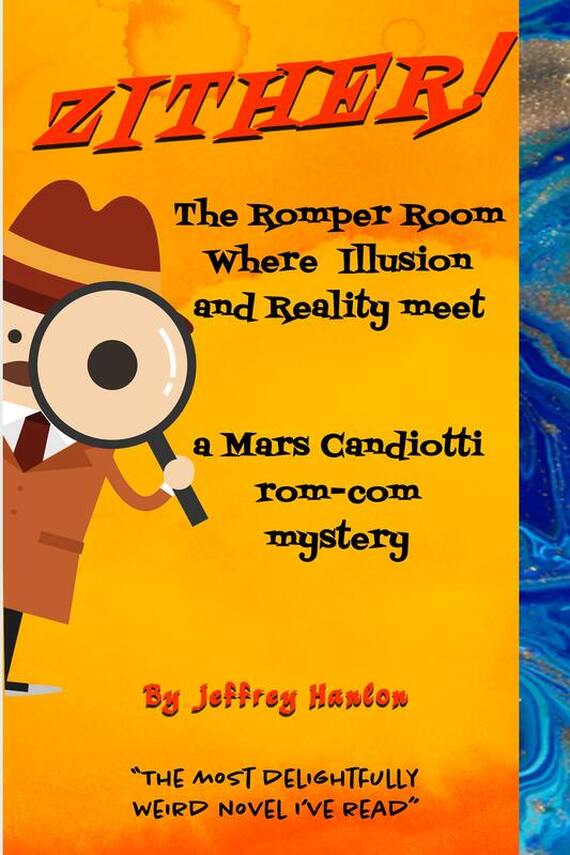 “A zany rollicking mystery adventure as compelling as it is hilarious.” ~ Independent Book Review

Guided by his magically prescient IHOP waitress, Mars strives to mitigate the shocking global consequences of the gazebo heist, even though he has no idea what the word mitigate means.

As Zither swallows its own tale, Mars finds it increasingly tricky to distinguish between real people and his rambunctious fictional characters. Zither becomes the romper room where his reality meets fantasy – and get frisky with each other.

Mars’ international odyssey leads to an explosive conclusion in Panama. Teevees around the world tune in to watch live coverage of “Carnage in the Canal”.

And amid the lunatic havoc that is Zither there is (of course!) an epic love story as Mars meets Marian, the brainy librarian he had dreamt of. Marian says his books are “slapstick existentialism with subjective reality couched in parable”. (This is news to Mars). But is Marian real, or just another illusion in Zither World?

And in Mars’ klutzy (yet endearing) courtship of the enchanting Marian will he ever muster the nerve to ask her for a date???​ 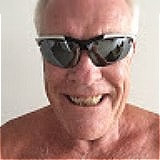 I was born in a Southern California beach town.

My family moved to Northwest Oregon when I was 7. Or maybe when I was 8.

Had we stayed in the Beach Boys town, and knowing myself as I do now, I suspect I would have grown long hair, started a rock band, and been heavily into drugs. The rock band would probably have been pretty good. The rest of it, not so much. I’d likely have joined the ranks of those like Jim Morrison and Janis Joplin.

We moved to a mountaintop. The last five miles to get there were gravel. The final two miles were steep and to the end of the road.

That’s where we lived: the end of the road, 22 miles to the nearest town.

Our closest neighbor, about a mile down the road, was a hermit who lived in a shack. He had a goat. About once a month the goat would visit us. Then the hermit would show up to retrieve his goat. I think the goat liked us better than the hermit, which is why the goat kept showing up. Goats are funny animals. I think they aspire to be house pets.

And speaking of animals, we had cats. Lots and lots of cats. Because we were remote and at the end of the road, unkind people – and ‘unkind’ is the kindest description I can use here – would dump their unwanted cats on or near our property. The cats would find our house. We gave them Fancy Feast and our love, and in turn they loved us.

My childhood friends didn’t visit too often. That was at least partly because when they did show up my father would say something like this: “Great! We have a job that could use an extra hand. Won’t take more than five minutes.” Well, that five minutes usually turned into an hour or two – volunteer labor! – and that friend would seldom visit again.

So my favorite childhood playmate was a 2000 pound Hereford bull, a big boy with horns spanning three feet. I’d go out in the pasture and the bull would strike a pose not unlike what you’ve seen in the movies where the bull was ready to charge, head down, eyeing me. But he wasn’t going to charge me. He just wanted his forehead scratched. And so I would scratch his forehead. He liked that, shaking his head every so often to show his approval. Then we’d elevate to a game that the bull might have called ‘Let’s see how far we can toss this little kid!’ and I’d place my right hip against his massive head and he’d toss me into the air like a sack of flour. Over and over, farther and farther, higher and higher. I could have done that for hours – I can fly! – but after a few tosses the bull would grow bored with the game and wander off. Probably to chase some cute heifers.

The nearest library was 30 miles away, and we ventured there often. It was a majestic old building, and the Grand Room had books on all four walls with reading chairs in the center. But that was not where I wanted to be. I figured all those books were popular books or books I was supposed to read. I wanted something different, so I would enter the room with a small sign that said ‘Stacks’. It was row after narrow row after row of books, floor to ceiling, dimly lit, dusty. It was like entering a cave. Filled with treasures!
It was in those Stacks that I discovered the likes of Kerouac and Heller and Huxley and Fowles and Steinbeck and Ellison and Bradbury and Hemingway and many many others.

As Stephen King said, “Books are a uniquely portable magic.”

And those, each in their own way, was the inspiration for the first book I wrote at the age of eight or nine: ‘Pond Scum’.

Jeffrey currently lives at an undisclosed location on the shores of the Caribbean where he spends his days is shorts and sandals making up stories.

He has a pet goat.