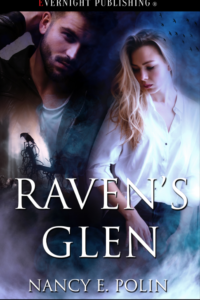 Skylar Donaghue has no memory of the night her parents died. When the perfect career opportunity arises, she ignores her brother’s superstitious warnings, choosing to leave the Choctaw reservation where she grew up and return to the place of her birth…

Widowed and caring for his young daughter, relationships are the last thing on Jack Langham’s mind. A chance encounter finds him intrigued, then captivated by a beautiful, but mysterious, violet-eyed woman and before he realizes it, he’s falling faster than fate may ever allow…

Stephen Donaghue holds the key to that long ago night, but never speaks of it. Now that Skylar is being pulled into the past, he fears its ghosts will darken their future and claim his sister forever…
Kindle Purchase Link
Nook Purchase Link
Evernight Publishing Purchase Link

Raven’s Glen elicited many emotions from me. Read on to discover which ones and why.
Curiosity: For a while, I pondered these questions…
What was up with the house?
What truly happened the night Stephen escaped with Skylar?
Will Nancy elaborate on John Patrick’s fascination with the occult?
What’s Molly’s background? How could she sense something was a miss with Jack’s house.
What was up with the numerous encounters with the ravens?
Did Stephen have a unique skill like Skylar?

Frustration: Several times, I wanted to shake some characters. I wanted Jack to realize that not everything was kosher with his daughter, girlfriend, neighbor, and house. I wanted Stephen to wake up and stop dragging his feet regarding Chloe.

Fear: For years, I have suffered from night terrors. No matter the age, they are frightening. I can’t imagine my bogeyman becoming real. I wouldn’t want to deal with a live version of Skylar and Avery’s monster either. Brief description: One side of his face was smashed in; the other was charred. An eye that appeared to be melting down his face.
Gross, right?!

Love and Hope: Love was expressed throughout this story. Not always with words but with actions. Avery playing matchmaker for her dad. Avery trying to protect her dad and Skylar from the burnt man. Jack and Skylar finding themselves. Stephen finally realizing how important Chloe was to him. Jack sitting vigil against Sky’s bedside. Stephen taking a walk on the dark side. Even the ravens brought hope that evil would soon leave everyone’s life forever.

I want to end the review with my favorite line from Raven’s Glen. It occurred during a meeting between Jack, the Principal, and a bully’s parents. The father of the bully said, “Words cannot physically harm, but hitting can.” What Jack said next is the absolute truth.

(Jack) “Words can cause intense damage. It’s just not as easily seen with the naked eye.”

Recommend this book to others? YES!

Nancy E. Polin began writing as a child and returned as a late bloomer to add experience and the occasional quirk to her work. She’s published four novels and several short pieces to date and is currently pursuing her MFA in Creative Writing. Nancy shares her life with her husband, kids and critters, nestled within the towering firs of the Pacific Northwest.