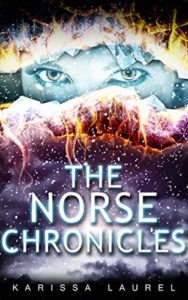 Solina Mundy lives a quiet life, running the family bakery in her small North Carolina hometown. But one night, she suffers a vivid nightmare in which a wolfish beast is devouring her twin brother, who lives in Alaska. The next morning, police notify her that Mani is dead. Driven to learn the truth, Solina heads for the Land of the Midnight Sun. Once there, she begins to suspect Mani’s friends know more about his death than they’ve let on. Skyla, an ex-Marine, is the only one willing to help her.

As Solina and Skyla delve into the mystery surrounding Mani’s death, Solina is stunned to learn that her own life is tied to Mani’s friends, his death, and the fate of the entire world. If she can’t learn to control her newfound gifts and keep her friends safe, a long-lost dominion over mortals will rise again, and everything she knows will fall into darkness.

Alone and exhausted after her month-long sojourn as a shooting star, Solina Mundy flees to southern California to lie low, recuperate, and plot a survival strategy. The one person she trusts to watch her back is her best friend, Skyla Ramirez. But Skyla has been missing for weeks. The arrival of a dangerous stranger and the discovery of a legendary weapon of mass destruction force Solina out of hiding and back into the fight for her life.

Solina knows she won’t last long on her own. She must find out what happened to Skyla and unite her contentious allies if she hopes to track down this devastating weapon before her enemies use it to burn the world to ash.

While recovering from a devastating betrayal, Solina becomes increasingly drawn to Thorin as he helps her hunt down Skoll, the mythical wolf who vowed to kill her. If she can find and destroy the beast, she’ll bring a swift and brutal end to her enemies’ schemes. But nothing ever goes as planned in Solina’s strange new world.

During her search for Skoll, Solina uncovers a plot to unleash a battalion of legendary soldiers and launch an apocalyptic war. Before she and her allies can locate the fabled army, several ghosts from her past return to haunt her. Solina must fight for life and the fate of the world, or her hopes for love and a peaceful future will go up in flames.

As if he sensed my reticence, Val made the move that he must have thought would convince me to agree. But it was the wrong move. He swooped me into his arms and kissed me, hard and possessive. For a heartbeat I saw an image of the earth sinking into a sea of fire, but reality returned in the next moment. Val’s kiss was brutish, like he was trying to claim me. I didn’t care for it at all, and I shoved at him. “Val, stop it,” I said, turning away to gasp for breath. I reached for my fire, but I never got the chance to use it.

This time when Thorin appeared, it wasn’t in his usual silent and sudden way. His arrival was loud, like a steam train roaring into the station, crashing against Val and slamming him into the wall. I gasped and jumped out of the way.

“What the hell do you think you’re doing, Val?” Thorin raged like an angry giant. Fee-fi-fo-fum, indeed. “She made it clear that she wants you to leave her alone.”

Val shoved against Thorin, his biceps bulging from the effort, but Thorin held him in place.

“She came to me,” Val said. “Apologizing, hoping to make up. Why don’t you ask her what she wants?” Val’s eyes darted to mine. “C’mon, Solina, tell us. You want me to keep my hands off?”

Thorin shoved him again. “It was a lot more than your hands.”

“Who do you think you are, Thorin? Her father? Her jealous lover? I know for a fact she’s never laid a hand on you.”

“You don’t know anything,” Thorin said.

Val’s certainty wavered for a second, his eyes flickering between me and Thorin. “Bullshit,” Val said, finally working up the force to push Thorin away. Val stormed over to his bed, grabbed the messenger bag containing his things, and slid the strap across his chest. “This is all bullshit.”

Fire simmered just under the surface of my skin, pushing like shaken champagne strains against a loose cork. The little devil on my shoulder urged me to let it out, convert all my feelings into a messy conflagration and burn down both Val and Thorin. Fortunately my voice of reason spoke louder. By the time I recovered my composure, Val was already out the door and making his way down the hall, so I turned my indignation on Thorin.

“What the hell?” I said. Thorin glared back at me, his eyes black and bottomless. “Who asked you to interfere?”

“Last night you announced to the whole house you were finished with Val. Then I come around the corner to find him plastered all over you, and you didn’t look like you were enjoying it.”

“Irrelevant!” I screeched. Thorin was intent on making me the damsel in distress, and I was sick of being underrated.

Thorin folded his arms over his chest and glared at me. “Who knew you were such a fickle creature, Miss Mundy?”

“It’s irrelevant because I was perfectly capable of handling Val on my own, but you always underestimate me. I’m not helpless. And stop calling me Miss Mundy. We both know you only do it to get under my skin.” I raged at him over the inconsequential because I didn’t want Thorin to know the depth of my confusion and hurt. Val’s insistence on treating me as some trophy to claim felt like a metaphorical fist squeezing my heart.

Thorin stepped closer and leaned down so that we were nose to nose. “And you continued to humor Val just to get under my skin.”

“Why won’t you understand that what happens between Val and me has nothing to do with you?”

Thorin leaned in even closer and dropped his voice. His warm breath brushed my cheek when he said, “Why won’t you understand just how wrong you are about that?”

“What are you saying?” My voice went dry and raspy as Thorin’s closeness filled my senses. My heartbeat changed from a frantic gallop to an anticipatory lope. My body was so quick to betray my convictions.

He brought his lips mere millimeters from mine and then stopped. His scent was thunderstorms and burnt sky. He cupped my face in his hands and rubbed a thumb over my lower lip. His touch was lightning, and it brought forth images of boiling clouds the color of bruises and winds like artillery, tearing into an army of shadows bearing claws and teeth. He growled, cursing in a language I did not recognize. If I’d had to guess, it probably translated to something along the lines of “damn it to hell.” Then he shook his head, and in a rough and broken voice he said, “I’m not like him. I won’t make his mistakes.”

All the stories in The Norse Chronicles can be purchased separately.

See below for those links and for A Norse Chronicles novella, not found in the collection above.

4 Responses to The Norse Chronicles by Karissa Laurel (Author Showcase)