Fighting for Everything by Laura Kaye (Book Showcase) 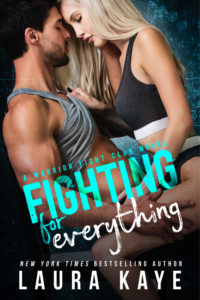 Loving her is the biggest fight of his life…

Home from the Marines, Noah Cortez has a secret he doesn’t want his oldest friend, Kristina Moore, to know. It kills him to push her away, especially when he’s noticing just how sexy and confident she’s become in his absence. But, angry and full of fight, he’s not the same man anymore either. Which is why Warrior Fight Club sounds so good.

Kristina loves teaching, but she wants more out of life. She wants Noah—the boy she’s crushed on and waited for. Except Noah is all man now—in ways both oh so good and troubling, too. Still, she wants who he’s become—every war-hardened inch. And when they finally stop fighting their attraction, it’s everything Kristina never dared hope for.

But Noah is secretly spiraling, and when he lashes out, it threatens what he and Kristina have found. The brotherhood of the fight club helps him confront his demons, but only Noah can convince the woman he loves that he’s finally ready to fight for everything.

“All done,” Noah said. He gently applied tape to hold the bandage in place, but with the way the back of her hand was swelling, there wasn’t any safe place to press. Sonofabitch. He couldn’t believe this had happened to her. And on his watch.

“You’re taking really good care of me, Noah. Thank you.”

“I will always take care of you,” he bit out. And then he realized what he said, and just how vehemently he’d said it. And damn if it hadn’t sounded a whole lot more than friendly. He chanced a glance at Kristina, and it was clear that she’d registered something in his tone, too. He threw away the trash and sat against the edge of the desk. “Why don’t you sit with the ice for a few minutes?”

Kristina rose and stood right in front of him, her pretty eyes even with his given how he was leaning. “I don’t need to sit,” she said in a low voice, her gaze boring into his.

Her eyebrow went up. Just the one.

Under other circumstances it might’ve made him laugh. Could she ever just fucking listen to him? But he was wound so tight over witnessing her getting hurt, over the idea that it could’ve been so much worse, over seeing her spilled blood, that it was all he could do not to redecorate Mr. Johnson’s office along the lines of his shower. He was nearly vibrating with pent-up frustration.

And now Kristina was boxing him in, observing him too closely, not giving him an out.

“Here’s the part where I’m gonna say ‘thank you,’ and you’re going to say ‘you’re welcome.’ Ready? Thank you for protecting me and taking care of me, Noah.” Her expression was expectant, and not a little amused.

Something about her playfulness wound him a notch tighter. Because he wasn’t playing. His gaze dropped from her eyes to her full pink lips, and desire sucker-punched him so hard he nearly gasped. “Does your mouth hurt?” he rasped.

Noah was on her in a flash. Hand cupping the side of her face, arm hauling her tight up against him, mouth claiming hers on a deep, needful, soul-healing kiss. Kristina’s muscles braced in surprise, but then she melted against him, going soft and pliant against all his hardness. And he was hard. So hard, so on edge, so in need of release, that he could’ve spun her around, lifted her onto the desk, and buried himself deep right here and right now.

He needed to be more gentle with her, but the need roaring through him wouldn’t allow him to slow down or back off. And her eager responsiveness didn’t help, either.

Her good hand fisted in his hair, her mouth sucked maddeningly at his tongue, and her body writhed against his erection. And goddamn the noises she was making, because the desperate moans and little mewls of need were hot as fuck, every one stroking his cock and making him harder.

Instinct told Noah that Kristina wouldn’t hinder him playing out his little fantasy on the desk.

Except she was hurt. And they were in a fucking sub shop. Annnd, he couldn’t forget about what was behind door number three-they were supposed to be Just. Friends.

She grasped at his face. “Yes, thank you for that, too. Keep doing it.” Kristina went in for another kiss. This time, her tongue penetrated him, like she wanted to fight him for control. And hell if that didn’t set off all kinds of heat inside him.

He flipped them around and pinned her to the desk, nearly leaning her backwards over it. The position brought his hard-on flush with that sweet, hot spot between her legs. She cried out and tried to grind against him, but his weight and her skirt kept her pinned tight.

“Shit, wait.” He stepped back, putting space between them. Because he didn’t think he’d have the strength to resist a third time. Especially when she stared at him with such abject fucking need, her cheeks flush with desire, her hair mussed from his hands, her luscious breasts heaving under that clingy V-neck top. “You’re hurt.”

Noah glared. “Kristina, I’m kinda on the edge here, if you can’t tell.”

She slipped up onto the desk and spread her legs, just the little bit the skirt allowed.

New York Times and USA TODAY bestseller Laura Kaye is the author of over thirty books in romantic suspense and contemporary and erotic romance and has sold more than one million books in the U.S. alone. Among her many awards, she won the RT Book Reviews Reviewers’ Choice Award for Best Romantic Suspense of 2014 for Hard As You Can. A former college history professor, Laura grew up amid family lore involving angels, ghosts, and evil-eye curses, cementing her life-long fascination with storytelling and the supernatural. Laura lives in Maryland with her husband and two daughters, appreciates her view of the Chesapeake Bay every day.