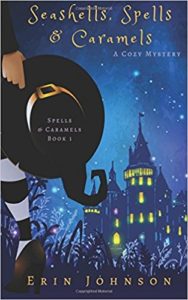 Murder at a magical baking contest off the coast of France.

Imogen’s spent her twenties in Seattle, saving every penny and missing every party, to follow her dream of opening her own bakery.

When that dream goes up in flames, she accepts a spot in a mysterious baking contest—one she doesn’t remember entering. She travels to a bustling, medieval village off the coast of France and discovers an enchanting world of magic and mystery, and learns that she, too, possesses powers.

Unable to so much as cast a spell, Imogen struggles to keep up with the other witches and wizards who have come from all over the magical world to the Water Kingdom’s big competition. She juggles relationships with a sweet new friend, a snarky baking fire, and a brooding, handsome baker. As Imogen falls for this bewitching world, she fears she won’t master her magic in time to win the job of Royal Head Baker, and will be forced to return to the shambles of her non magical life.

It only gets worse, when a competitor drops dead in the middle of the big white baking tent, and Imogen’s the prime suspect. Now, she’ll not only have to survive the vampire and psychic judges, but also clear her name by finding the real murderer, before they strike again.

With a killer on the loose, a missing prince, and the Summer Solstice Festival fast approaching, Imogen will have to bake like her life depends on it- because it just might.

The string quartet, persuaded into playing the conga, churned out the familiar song as a middle-aged man sat next to them, an upended ice bucket between his knees, playing the “drum.” The line of rehearsal dinner guests snaked between tables. I peeled my eyes away from the conga line as a beautiful guest sauntered toward me.

She smiled, her teeth bright against her dark skin. Her hair, tightly curled and piled atop her head in an enormous bun, bounced as she swayed her hips to the music, her snow-white gown catching the candlelight from the tables.

“Cake or a cupcake?” I asked for the umpteenth time. I smiled and held up one of each.

She tapped a slender finger against her lips as her dark eyes darted from one to the other. The diamond bracelets she wore slid up toward her elbows as she threw her hands in the air. “Oh, ow about zem both, eh?”

I grinned and handed over the plates. I loved French accents. Not that I’d ever been to France, or anywhere really. Before I’d moved from St. Louis, I’d never even been out of state.

“I’ve been earing all night about ze desserts.” She stepped closer and lowered her voice. She smelled like jasmine. “I eear they’re just bearsting weeth mageeck.” She winked, then held the cupcake up to her mouth, gingerly taking a bite around the wrapper. She moaned and bent her knees, sinking halfway to the ground. “Incredible. Just incredible. You should enter ze contest, you reeally should. And I don’t do false flattery, believe me.”

I raised a brow. “The contest?”

She looked me up and down. “You reeally don’t know? Ze Water Kingdom’s holding a contest for ze new royal baker. Last one died recently.” She looked around and leaned closer, her voice hushed. “Ze official word is she died of a ‘art attack, but if you ask me, eet was dark mageeck. Somezing underhanded, you know? Murder.” She leaned back and straightened. How much had this woman had to drink? “Zat shouldn’t scare you zough. I reeally zink you should enteer, zhere’s steel time. I probably ’ave a flyer somewhere.” She set the plates down and fished around in her sparkly white clutch.

“Zey’ve been distributing zem all over ze kingdoms. Anyone can apply, anyone at all… well almost, no shifters, ze usual, but ze’ll take emigrants like you.” She poked around some more in the tiny clutch.

Pretty sure if you haven’t found it by now, it’s not going to suddenly appear. The bag looked like it could barely hold a credit card… maybe.

She looked at me and shrugged her slender shoulders. “Can’t find one.” She glanced around and then winked. “Don’t usually break ze rules when traveling on visa, you know.

But I am here as ze date of ze retired ambassador, so if I geet in a beet of trouble, he’ll just geet me out.”

I scanned the conga line. Did she mean Ben’s grandpa?

A small sound, a zap, like snuffing a candle out with wet fingers, made me turn toward her again. In her hand she held a large, brown sheet of paper. “We’ll just keep zat between us, eh?”

Goose bumps prickled up the back of my neck and arms. I looked between the paper and her face. Where had it come from? It was too large to fit in her bag without folding, yet it was completely smooth and crisp. She handed it to me. The oddly thick paper seemed to be coated in wax. I sniffed it and smelled honey.

“Well, I’m off.” She lifted the plates. “Thank you for ze delicious treats. So good to have met you.”

I nodded, not sure how I felt about this strange and beautiful woman. “You too.”

“Think about eet.” She lifted her chin toward the flyer in my hand and danced her way back to the party.

I held the waxy paper up to my face and read, “The Magnificent Contest for the Water Kingdom’s Next Royal Baker.” 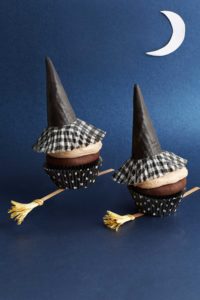 I absolutely adore watching cooking competition shows so reading a story where competitors are magical, paranormal beings sounded too good to pass up.  Much like  Master Chef and Top Chef, in Seashells, Spells and Caramels, readers will be treated to theme challenges where contestants will be voted off until a winner is crowned. As with the other popular shows, there are baking mishaps, rivalries and tears.

However, Seashells, Spells and Caramels had a few things you’d NEVER see on any primetime competition show.

2.) You’ll never witness a flame speaking to you.

Seashells, Spells and Caramels had humor, mystery, and a hint of romance. A truly magical, delicious read…..one I’m sure will be a bestseller for the talented Erin Johnson. 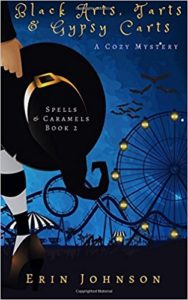 A dark carnival and a dire prophecy lead to murder and mayhem.

With the Summer Sea Carnival visiting the enchanted island of Bijou Mer, Imogen jumps at the chance to help run the royal bakery booth. It’ll get her out of the palace and allow her to continue avoiding her feelings for a certain engaged prince.

Imogen’s plans to lay low are shattered when the world-famous necromancer, Madame Zerna, is found dead, sawed in half on the dark magician’s table and Imogen’s friend Rhonda is caught red-handed. With incriminating evidence piling up against Rhonda, Zerna’s rival, Imogen promises to help clear her name by finding the real murderer.

But between running the booth, encouraging Maple as she struggles to lead as head baker, and taking spell lessons from the friendly strong man, Imogen’s got her hands full. And it’s no easier getting information from the evasive dark magician or Madame Zerna’s secretive assistant. Even Rhonda’s hiding something.

With the Night of the Dead fast approaching, and Rhonda headed for a maximum security witch prison, Imogen races to unearth the real killer in time to save her friend. But in a mysterious carnival where nothing’s as it seems, will Imogen have the magical powers to keep from being on the chopping block herself? 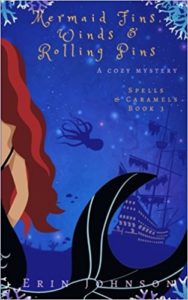 Murder at a Mermaid Nightclub

The enchanted village of Bijou Mer’s on high alert, with the villainous Horace on the loose. Imogen’s excited to escape the tension with a trip to the underwater Mermaid Kingdom to bake for the young mermaid queen’s engagement to the pirate king.

But when the mermaids turn out to be less French Riviera and more Jersey shore, the bakers are wrapped up in their world of clubbing in sea caves and fighting off seals for the best tanning spots, and are embroiled in a pirate smuggling scandal. It gets worse when a member of the mermaid court is found dead in a fishing net, and one of Imogen and Maple’s baked goods seems to be the murder weapon.

Imogen tries to fish out the real murderer to clear their names, while struggling with her romantic feelings for Hank. At the same time, she’s working with him to learn to control her magic and investigate Horace’s riddle and her own mysterious past.

As the mermaid court’s freewheeling lifestyle rubs off on the bakers, the gang lets loose and passions rise to the surface. But with a giant octopus crawling the ocean floor, the mermaid court filled with simmering secrets and scandals, and the ever present threat of the Badlands Army, Imogen must solve the murder before she ends up fish food herself. 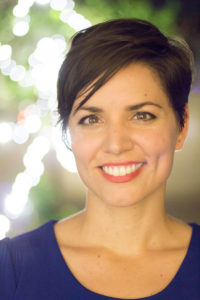 A native of Tempe, Arizona, Erin spends her time crafting mysterious, magical, romance-filled stories that’ll hopefully make you laugh. In between, she’s traveling, napping with her dogs, eating with her friends and family, and teaching Pilates (to allow her to eat more).
Website Link
Facebook Link
Twitter Link