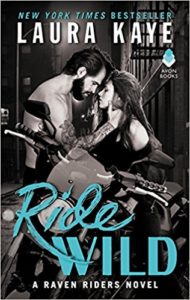 Brotherhood. Club. Family.
They live and ride by their own rules.
These are the Raven Riders…

Wild with grief over the death of his wife, Sam “Slider” Evans merely lives for his two sons. Nothing holds his interest anymore—not even riding his bike or his membership in the Raven Riders Motorcycle Club. But that all changes when he hires a new babysitter.

Recently freed from a bad situation by the Ravens, Cora Campbell is determined to bury the past. When Slider offers her a nanny position, she accepts, needing the security and time to figure out what she wants from life. Cora adores his sweet boys, but never expected the red-hot attraction to their brooding, sexy father. If only he would notice her…

Slider does see the beautiful, fun-loving woman he invited into his home. She makes him feeltoo much, and he both hates it and yearns for it. But when Cora witnesses something she shouldn’t have, the new lives they’ve only just discovered are threatened. Now Slider must claim—and protect—what’s his before it’s too late.

It was just the two of them. Standing nearly chest to chest in a downpour. Not speaking. Not moving. And Cora felt torn between the desire to hug him for coming after her and hit him for provoking the anxiety she managed to keep battened down tight ninety-nine percent of the time.

He stared at her for another long moment. “I’m kinda fucked up over here, Cora.”

Her lips almost twitched in humor, but she bit back the impulse, because those seven words were quite possibly the most honest, personal thing he’d said to her in three months of working for him. And it felt . . . important, like some wall had come down between them. Or, at least, started to. “I know, but on some level, aren’t we all?”

He didn’t answer, but what he did say still hit her square in the chest. “You’re the best thing that’s happened to my boys in years. I don’t want to mess that up for them. I’m sorry if I have.”

“You haven’t,” she said, shaking her head, rain catching on her eyelashes as she peered up at him. “But don’t do it again.”

Slider gave a single nod, then leaned forward, his face coming close and then pausing a hairsbreadth away. For a moment, Cora was sure he was going to kiss her, but then he grasped the handle and yanked opened the squeaking door. “Now get in.”

Shaking a little—from the chilly rain, she told herself—she climbed onto the old bench seat. The rain had plastered Slider’s T-shirt to his chest, giving her a pretty clear view of the lean, muscular frame beneath. And she found herself wondering what kissing him might’ve been like. How hard his body would be against hers. How far she’d have to tilt back her head to meet his mouth. How ticklish his whiskers would be against her lips.

The wondering made her shiver.

He slammed his door and frowned at her. “You okay?”

“I’m wet, cold, and irritated, but sure. I’m great,” she said defensively. Because she was still a little miffed at him for making her freak out—and for making her feel curious about kissing him.

Just a little curious. Hardly at all, really.

The corner of his mouth lifted. Not much, but the movement was there. And it made Cora stare. Because the change in his face, small and fleeting though it had been, made the corner of his eye crinkle a little, too. “Well, I think I can help with two of those,” he said, putting the truck in gear and swinging a hard U-turn.

“Wait, where are we going? The clubhouse is the other way.”

“Uh-huh,” he said, slanting her another glance. All the amusement was gone this time, though, and in its place was something intense she couldn’t name. “I’m taking you home.”

New York Times and USA TODAY bestseller Laura Kaye is the author of over thirty books in romantic suspense and contemporary and erotic romance and has sold more than one million books in the U.S. alone. Among her many awards, she won the RT Book Reviews Reviewers’ Choice Award for Best Romantic Suspense of 2014 for Hard As You Can. A former college history professor, Laura grew up amid family lore involving angels, ghosts, and evil-eye curses, cementing her life-long fascination with storytelling and the supernatural. Laura lives in Maryland with her husband and two daughters, appreciates her view of the Chesapeake Bay every day.