A Wedding for Christmas: A Twilight, Texas Novel by Lori Wilde (Book Showcase) 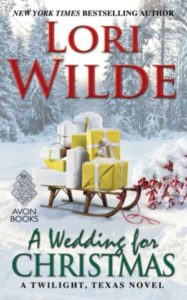 The whole town is ready for the holidays: The Cookie Club is baking, Main Street glitters with lights, the carolers sing . . .There’s even a Christmas wedding.

When bodyguard Ryder Southerland sees his best friend’s sister Katie at an L.A. Christmas party, he mistakes the slinky blonde for a celebrity stalker and tackles her. Then they tackle each other . . . at his place. The next morning, Katie’s gone, and Ryder tells himself it’s for the best. It isn’t. Now, one Christmas later, Ryder’s falling for the woman he’s been missing in the town he hasn’t missed at all . . .

Katie Cheek’s outgrown the romantic fantasies she had about Ryder when she was fifteen. Katie’s packed their hot night away in a box labeled “fling”—or tried to. But Twilight’s bad boy is the best man in her brother’s wedding. And up-close and personal, Ryder’s impossible to ignore. So Katie can either go into hiding—or surrender to Christmas magic.

“BOLO. BOLO. Be on the lookout for a hot blonde in a red dress.”

Personal bodyguard, Ryder Southerland resisted an eye roll, and muttered into the tiny microphone clipped to his lapel. “I know what a BOLO is, Messer, and I don’t need an update every time you spy a good-looking woman.”

Les Ketchum, the rodeo star turned country and western chart-topping singer, that Ryder had been hired to protect. Two weeks ago Les had broken things off with a buckle bunny in possession of a mean streak who couldn’t seem to take hasta la vista, baby, for the brush off it was.

Ryder’s entire body tensed, and he pressed a hand to the blue tooth device that fed Messer’s voice into his ear. “You sure?”

“Where?” Ryder leaned over the balcony railing, scanning the well-heeled crowd milling in the art gallery below.

You’d think a hot blonde in a red dress wouldn’t be that hard to spot, but since it was a celebrity-stubbed holiday bash a surprising number of women were wearing red. And sun-drenched LA had a knack for manufacturing blondes.

“You got Ketchum in sight?” Messer asked.

“Yes.” Ryder swung his gaze to his client who was kissing a busty redhead that was known for her appearances in makeup commercials, underneath a bouquet of mistletoe. “Does your red-dress blonde look armed?”

“It’d have to be in her purse. That dress is sprayed-painted on. Couldn’t hide anything underneath that.”

“Can you still see her?”

“Negatory. She disappeared in the crowd.”

“I’m trying, but some drunk sitcom-actress just took off her top, and there’s a hundred guys in my way.”

This time, Ryder did roll his eyes.

Trite. His job was trite. Protecting spoiled celebrities from overly zealous fans who thought getting near them meant something special. But after four years in the Middle East, and an unpleasant bout of PTSD, Ryder was good with trite.

And working for his former platoon leader’s personal security business in LA was a long sight better than crawling home to Twilight where small town minds had branded him disreputable years ago.

He was twenty-nine years old, had been a decorated MP in the US Army, and yet he couldn’t shake the old childhood wounds, and the names he’d been called—bad boy, punk, troublemaker, delinquent, thug.

Ah, his youth. Those were the days.

There was only one family in the whole town he gave a fig about, and that was the Cheeks. The family who’d taken him in when his father kicked him out and no one else would touch him.

His favorites of all the Cheeks was his best friend Joe, and the other was Joe’s kid sister, Katie. He hadn’t talked to Joe since his friend had moved back to Twilight to take over his ailing grandfather’s Christmas tree farm that summer. And it had been two years since they’d seen each other in person, back when Ryder had crashed at Joe’s place for a couple of months after he’d been discharged from the Army, and he was struggling to get his act together.

And as for Katie?

In his mind she was still the gawky fifteen-year-old who’d flung herself into his arms and kissed him. And that had been the last time he’d seen her, but he couldn’t help wondering what she looked like today.

Head in the game, Southerland. Katie ain’t nothing but a fond memory.

He leaned farther over the balcony railing for a better look, watching the circular metal staircase that led to the second story exhibits. The party was in full swing. The band blasted Christmas songs. People packed in close dancing, drinking, eating canapés served by tuxedoed waiters passing through the throng.

The crowd was eclectic. Young and old, trendy and traditional, dressed down and dressed up, an equal mix of male and female. The majority of them were wealthy, or plus ones of the wealthy. Ironic, how much money was being spent raising funds to benefit poverty. Why not just give the money to the homeless?

He scanned the three exits he could see, each one manned by museum security, and finally caught sight of Messer trapped in a bottleneck near the entrance.

He counted off the attractive blondes in red dresses, one, two, seven, a dozen. Was one of the Ketchum’s stalker?

Concerned, he glanced back at Ketchum. The celebrity and his woman of choice, who had shifted to the bench exhibit seating, near the restrooms and they were still in a lip-lock, hands all over each other. The second floor was reserved for special VIP sponsors, and Ryder was the threshold guardian to their domain.

From his peripheral vision, he caught movement at the top of the staircase. A blonde. In red. Hurrying.

Hurrying hell, the woman was full on running.

Immediately, Ryder tensed, and his hand touched the Taser at his hip. He didn’t want to use it, or the concealed Sig Saucer in his shoulder holster. Discretion was a big part of his job. Diplomacy another.

Besides, she was a woman. He was big, and she was small. Body block, and chokehold ought to do it, and that was only if she was unreasonable.

He didn’t want things getting messy.

In two long-strides, he reached her, and for a split second, he was struck by the notion that anyone watching them might assume they were lovers rushing into each other’s arms.

Except she showed no signs of slowing down, her gaze fixed to the spot where Ketchum sat kissing the redhead. This had to be the stalker, hyped up with rage, jealousy, adrenaline and god knows what else.

Instinct, honed from numerous tours in the sandbox, took over and he reacted without hesitation. It happened during the space of a single breath. Grabbing her by the arm, flipping her onto her back, falling atop of her, pinning her to the floor in a four-point restraint.

“Stand back people!” Messer shouted. Ryder felt rather than saw his colleague herding people down the steps. “Nothing to see here. Go downstairs and enjoy the party.”

Ryder’s hands manacled her wrists. His cowboy boots locked spread-eagle around her ankles. The woman was panting.

And so was he, because he realized not only was she not Ketchum’s stalker, but he knew her.

Ryder peered down into her face. A familiar face despite the fact it had changed a lot over the past twelve years.

What in the blazes?

All the air exited his body in one hard puff.

Her features were softer, thinner, and prettier than ever. The glasses were gone, and so were the braces, and instead of frizzy untamable, dishwater blond curls, her hair was straight and lush and golden.

Yes, she’d changed a lot, but he would recognize her anywhere.

It was high school buddy’s kid sister, all grownup, and curvy in the most dangerous places.