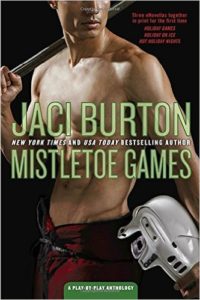 Holiday Games
For the high-achieving Elizabeth and her husband, baseball player Gavin Riley, failure is not an option. So when it comes to making a baby, they’re not about to let any holiday distractions get in the way of their necessary pleasures…

Holiday on Ice
It’s the season for giving and superstar hockey player Patrick “Trick” Niemeyer is ready to give dancer Stella Slovinski his heart wrapped up in bow. But he’ll have to melt the ice surrounding her heart to keep her from walking away…

Liz Riley sat in her bathroom, crushing disappointment tightening her stomach as she stared at the pregnancy test.

Her period was three days late. She’d been so certain this time.

Dammit. The word failure wasn’t in her lexicon. She’d always succeeded, usually found a way to get what she wanted. Even when faced with a temporary roadblock, she wrangled her way around it and won. She was one of the best sports agents in the business, and always got what she wanted.

But that was business, and this was personal. For the past year, she’d tried—and failed—numerous times to get pregnant.

She tossed the stick into the trash and stared at herself in the mirror.

She whirled to face her husband, Gavin, the love of her life and the only man who could have ever made her want to have a baby.

From Holiday on Ice

It had been a grueling game tonight, and they’d eked out a win by only one goal over Winnipeg. Since it was Friday night and they were on home turf, they deserved to celebrate.

He and Drew were of like minds there, which didn’t surprise him since they were friends and had been as long as they’d both played for the New York Travelers.

“Let’s get this party started.” Trick led the way to the bar.

“How many of us are having beer?” Avery Mangino, their goalie and the main reason they’d won tonight, turned and counted as all of them raised fingers.

“Okay, that’s a half dozen.” Avery turned to the bartender, who slid bottles across.

Trick took a long draw from the bottle, then sighed. Nice and cold, like the ice had been tonight. But the crowd had been hot, and so had the game. They’d had to work hard for this win, and it had been a nail-biter all the way to the buzzer at the end of the third period.

“We need to avoid these close ones,” Avery said, leaning against the bar. “You all are going to have to score more goals next time.”

Victoria Baldwin determined it had been six months, three days, four hours and—she looked at her phone and calculated—approximately seventeen minutes since she’d last had time off.

She was damned overdue. She normally took holidays more frequently. Working in the sports industry for fifteen years should have netted her vacation time whenever she wanted it, but being a sports agent meant that sometimes you had to work your ass off, and this had been one of those brutal kinds of years.

Not that she was complaining. Picking up a few new clients had meant an uptick in her bank account, which allowed her to take these getaways. So she’d suck it up and do the hard work when it was necessary.

And now she had three weeks off. She could already feel the stress melting away.

She’d vacationed all over the world, from Mexico to Fiji to Europe to Asia to every island in the Caribbean, but she always loved coming back to Hawaii, and especially the island of Oahu. It was the flowers. She loved the smell of the flowers here, and the staff at her favorite hotel on the north shore were incomparable.

She’d been lucky to get in on such short notice. They were booked solid for the international surfing competitions that would start in a few days. Plus it was also the Christmas holiday. But they’d made a suite available for her, knowing she was a preferred customer and she tipped very well.

She threw on her swimsuit, then put on a pair of shorts and a tank top over it, laced up her shoes, lathered up the sunscreen and grabbed her sunglasses. First item on the agenda was a run on the beach. It was the perfect way to release stress and unwind.