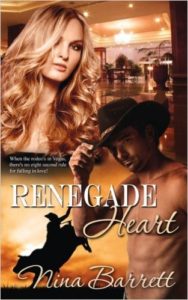 As if Vegas didn’t have excitement enough, December brings the National Finals Rodeo to the city. Heading the Imperial Hotel’s participation as a host hotel, Kerstin Hennepin is rushing to a meeting when a fall sends her tumbling into a stranger’s arms and he’s in no hurry to let her go.

Jake Aaron is a troubleshooter for the rodeo Or maybe he’s just plain trouble. Their attraction is instant and one close encounter leads to another, but Jake comes with plenty of questions. True he’s busy handing the offstage antics of rowdy rodeo contestants, but does his job also include romancing a young barrel rider and carrying a concealed weapon?

With the finale of the Finals approaching, Kerstin needs answers. But when her search for the truth reveals more is going on behind the scenes than on the arena floor, she and Jake are squarely in someone’s cross hairs.

Interested?
Below is a sneak peek of Renegade Heart – Let me know what you think.
Thanx! 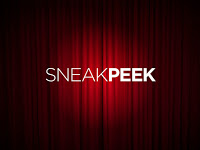 “This way.”
It wasn’t a question.
Putting an arm around her shoulders, Jake steered her away from the entry to a shadowed alcove behind a pair of oversized ornamental urns. Droplets of water from the fountain misted the air. He pulled her into the dark recess as if it had been placed there for them. Kerstin flinched as the cold of the stone façade penetrated her thin clothing. The afternoon’s warmth was only a memory now. Before she could shiver, he swept her into an embrace. Her legs braced against his, he trailed kisses down her exposed neck.
“Jake.”
It sounded like she was begging.
Was she? Backed against the stone of the Imperial, she was trapped between fire and ice.
He captured her head in his hands, his tongue parting her lips.
Her breath caught in her throat as she melted into him. The sweetness of his mouth was intoxicating, like drowning in honey.
Her hands made their way around him, savoring the tight muscles of his chest and waist. It was December and she was burning up. His thumb flipped the clasp of her bra. Was the Imperial’s director of special events about to be taken up against the wall of the hotel’s entryway? Over the years there’s been similar stories about some of the hotel’s randier guests.
Her hands found their way under his suit coat and down his back, feeling the dampness of her shirt. She caught her breath as he cupped her breasts. He was saying something about his room.
She jerked her head, staring up at him. Taking both hands, she shoved back against him. Her sudden strength must have caught him off-guard. He took a step back.
“Kers . . .”
She twisted away as he reached for her.
His room? His room?
She was at the entrance and inside before the doorman had a chance to open it.
His room? Not until Jake Aaron could convince her he wasn’t Ginny Mathieu’s lover and explain why he carried a concealed weapon in a back holster – .40 caliber if she knew her weapons.
And she did.
PURCHASE LINKS:
Kindle / Paperback (Amazon)  /
The Wild Rose Press

(review request submitted by the author for an honest critique)
For those who live the rodeo life or have every been to one, I know you’ll appreciate the attention to detail in Renegade Heart. She illustrated beautifully the hard work it acquires to pull off the rodeo. How much time and effort it takes to keep guests, vendors, competitors, basically everyone happy. For the most part, it appeared to be a 24-7 job but Kerstin did it with style and grace.
For those not familiar with rodeos, Nina explained certain events in a rodeo without it appearing mundane. BTW, if you haven’t seen a rodeo before, check one out. It’s a helluva thing to witness — intense, on the edge of your seat action! Plus, you can’t go wrong with men or women in chaps. For that alone, I’d buy a ticket.
Before I conclude this review, I want to touch a bit on the mystery portion of this western tale. For me, the mystery was boring. It didn’t hold my interest at all. The conclusion of it seemed rushed as well. Actually the last 10 or so pages seemed thrown together because the author needed to ‘wrap it up’.
Hey, at least Jake and Kerstin got to ‘ride off into the sunset’ together and that’s all that matters…. Right?
PURCHASE LINKS:
Kindle / Paperback (Amazon)
The Wild Rose Press
Heart Rating System – 1 (lowest) and 5 (highest)
Score: ❤❤❤ 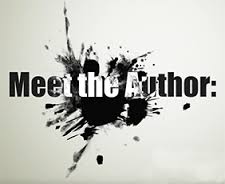 Hi, I’m Nina Barrett. I’ve been a public school teacher, focusing on early childhood education and am having a blast now writing contemporary romances. I’ve always wanted to be a writer. I was one of those children who loved going to bed at night because you could lie there and make up stories. I’d be out west with Roy and Dale or in Sherwood Forest with Robin Hood. It took time and persistence to gain publication. Winning a scholarship to the Antioch Writers’ Workshop gave me a boost and my forthcoming romance Renegade Heart is dedicated to them in appreciation. Musa Publishing released my first book Marriage Made in Haven in June 2012. The Wild Rose Press published Return of the Dixie Deb in December 2013 and A Man to Waste Time On in January 2015. Its sequel Renegade Heart is available April 27th.

I live in Southwest Ohio. My hometown recently was featured on the cover of Ohio magazine. I enjoy traveling – I’ve been to the top of Masada in Israel and the bottom of the great pyramid at Chichen Itza. Advocating for autism research and education is a passion.

I’m on Facebook as nina.barrett.315 and at nina@ninabarrett.net – love to hear from readers and fellow writers!

Tell us about your background – have you always been a writer?

(Nina) At least in my head. My mother was a great reader, reading to me nightly and on long car trips – Mother Goose, Thornton Burgess, later introducing me to the classics – Heidi, Treasure Island, Little Women. I finished my first complete story in junior high, an Agatha Christie type mystery, and continued writing through high school. College, marriage and a career in education kept me busy, but I continued writing and submitting manuscripts growing more and more discouraged. Winning a scholarship to the Antioch Writers’ Workshop re-energized me and led to the publication of my Western romance Marriage Made in Haven.

What lead to the writing of Renegade Heart?

(Nina) I was intrigued by the excitement and explosive energy of Las Vegas. In my previous release, A Man to Waste Time On, Cinnamon Smith is stunned to realize the general manager of the neighboring Imperial Hotel Casino is the waste of time loser who dated and dumped her sister back in their hometown. And he wants to date her. No way . . . but then securing an order from his hotel might prove salvation for her struggling teashop. And he is so good looking.

Doing research and finding out what goes on behind the scenes of a major Vegas property was so captivating it lead to Renegade Heart and Kristin Hennepin’s adventures when the National Finals Rodeo comes to Vegas and Kristin falls into the arms of a rodeo troubleshooter.

Who are some of your favorite writers?
(Nina) Jennifer Crusie, of course. She began by writing category romance for Harlequin while teaching English in a local school system before moving on to being the best selling author she is today. Having taken a class with her at Antioch, I can attest to the fact she is unfailingly supportive and encouraging to neophyte writers.

What’s coming up for your readers?

(Nina) My work-in-progress, Deep, Dark, Delicious. And Deadly, continues my Vegas trilogy. When candy heiress Sofie Matthew wakes up from her coma in a hospital bed, there’s a strange man staring at her, a murder to be solved and a ring on her finger. What’s the story with that?