Under the Lights by Shannon Stacey (Book Review) 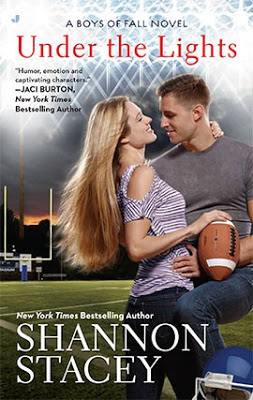 They were the golden boys of fall: Stewart Mills High School’s legendary championship winning football team. Fourteen years later, they’re back to relive their glory, save the team—and find themselves again…

Chase Sanders’s life has taken a lot of crazy turns lately. But returning to his hometown to help his old coach keep his high school football team afloat might be the craziest thing to happen to him yet. That is, until he starts falling for the last person he should—Coach’s gorgeous daughter…

Kelly McDonnell learned the hard way that cocky, charming men are nothing but trouble, so she knows Chase is bad news. Still, she can’t resist his smile—or the rest of him. But when his loyalty to her father conflicts with their growing attraction, any hope for a relationship might be blocked before it can even begin…

—–> REVIEW <—–
This book depicts small town living to a tee.
Everyone will know your business and won’t hesitate to stick their noses into it. It’s truly hard to have any secrets.
However, the bright spot of small towns (also illustrated in this tale) is how people band together in good times and especially in bad.
If you’ve ever lived in a small town (like myself), you know how important a single business can be and when it goes under, families go under with it.
In Under the Lights, friends and neighbors banded together to save a football program which to some might seem like nothing but to them it was everything.
Again, since my school had little in the way of money, I’m glad all their hard work paid off because this town needed a win desperately.
Heart Rating System:
1 (lowest) and 5 (highest)
Score: ❤❤❤❤1/2 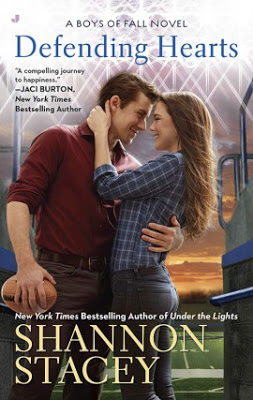 They were the golden boys of fall: Stewart Mills High School’s legendary championship football team. Fourteen years later, they’re back to relive their glory, save the team—and find themselves again…

Globetrotting photographer Alex Murphy returns to Stewart Mills for a football fundraiser, but stays to document the football team and the town’s changes. Since his project includes photos of the Walker farm, he rents a room there.

Needing money to save the family farm, Gretchen Walker doesn’t have time to deal with the sexy photographer in her house. After all, Alex is a man with no sense of home, and to her, home is everything. But when she finds herself falling for him, she’ll be forced to decide where her dreams really lie…

PURCHASE LINKS: Paperback or on Kindle

5 Responses to Under the Lights by Shannon Stacey (Book Review)