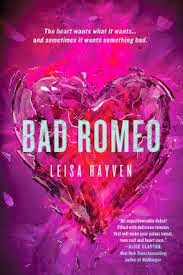 While performing the greatest love story of all time, they discovered one of their own…

Cassie Taylor was just another acting student with big dreams at her prestigious performing arts college, then she met Ethan Holt. She was the good girl actress. He was the bad boy on campus. But one fated casting choice for Romeo and Juliet changed it all. Like the characters they were playing on stage, Cassie and Ethan’s epic romance seemed destined. Until it ended in tragedy when he shattered her heart.

Now they’ve made it to Broadway where they’re reunited as romantic leads once again, and their passionate scenes force them to confront the heartbreaking lows and pulse-pounding highs of their intense college affair. For Ethan, losing Cassie was his biggest regret, and he’s determined to redeem himself. But for Cassie, even though Ethan was her first and only great love, he hurt her too much to ever be trusted again. The trouble is, working with him reminds her that people who rub each other the wrong way often make the best sparks. And when it comes to love, sometimes it’s the things that aren’t good for us that are the most irresistible.

When I first started reading this novel, the flip flopping from past to present was slightly annoying. It was happening too frequently and almost drew me away from what was happening now. However, the deeper I got into the story, I started to see its value.
I’m not sure if I’m a fan of the characters. For the most part, Ethan repeatedly came across as a jerk and Cassie seemed like a desperate woman. A bit too needy for my tastes. But on the other hand, they made each other better people as their story progressed.
When you read the emails he sent her, especially the final one, I’m sure you’ll be mentally saying “aww” or something to that nature.
His sweetness and her sudden backbone will have me tuning into the next story — Broken Juliet.