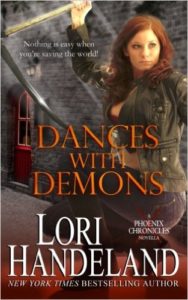 Quinn has been in love with Megan from the moment he saw her. Too bad he’s living a lie. He isn’t as klutzy as he makes out, nor as human as she believes. Quinn was sent to protect Megan from anything that slithers.

But there’s danger afoot, and the best place for them both is one that’s far, far away. A place Quinn Fitzpatrick once called home. Ireland–land of fairies and gargoyles, shape-shifters, dragons and more.

There they will dance with demons, and Megan will uncover every secret Quinn has.

It’s rare that the hero in the story is a virgin. That, I found refreshing.
He was also a shifter, but was also something more. What else…..yeah, I’m not telling you. You’ll have to buy the novella and discover that secret for yourself. *grins*
I was thrilled to see Liz back in the series. She was “missing” in the last short story and it wasn’t the same. Now if only Sawyer would return. He’s one of my favorite characters and I know his story isn’t over. Can’t be.
Heart rating system – 1 (lowest) and 5 (highest)
Score: ❤❤❤1/2

MORE STORIES IN THE SERIES

HEX APPEAL – 6/12 (an anthology containing “There Will be Demons,” a Phoenix Chronicles)