Ours to Love by Shayla Black (Book Review) 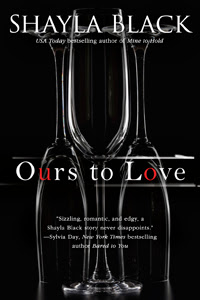 Xander Santiago spent years living it up as a billionaire playboy. Never given a chance to lead his family business in the boardroom, he became a master in the bedroom instead. His older brother, Javier, inherited the company and worked tirelessly to make it an empire. But while cutthroat corporate espionage took its toll on Javier, nothing was as devastating as the seemingly senseless murder of his wife. It propelled him into a year of punishing rage and guilt…until Xander came to his rescue.

Eager to rejuvenate Javier’s life, Xander shanghais him to Louisiana, where they meet beautiful London McLane. After a decade of tragedy and struggle, London is determined to make a fresh start—and these sexy billionaire brothers are more than willing to help. In every way. London is stunned to find herself open to every heated suggestion…and desperately hoping that her love will heal them.

But a killer is watching, on a single-minded mission to destroy everything the Santiago brothers hold dear, especially London. As fear and desire collide, every passionate beat of her heart could be her last.

When I purchased this story, I knew this was going to be about two brothers falling in love with the same woman and having sex with her. However, since I am a fan of Shayla’s and I wanted to read the continuation of the series, I cracked opened the book anyways.

With that said, I can’t understand how a brother can get aroused watching his sibling have sex with someone. For me to enjoy the scenes, I actually pretended they were only friends and not brothers.

What I did like about this story was the tenderness, the patience, and understanding they shown London when she unveiled her back to them. Their reaction was absolutely perfect!

One final note: If you were waiting for the conclusion of “Who killed Javier’s wife and why”, the wait is finally over. 🙂

One Response to Ours to Love by Shayla Black (Book Review)