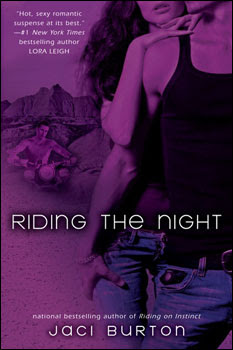 AJ and Pax work together as undercover operatives for a government agency of bad-boy bikers known as the Wild Riders. And though they play as hard as they work, both men are looking for the one woman who can tame them…

On vacation, AJ and Pax run into AJ’s high school sweetheart, Teresa. While they’re catching up at Teresa’s bar, a fight erupts between two biker gangs, leaving one man dead and Teresa’s brother wrongly accused of murder. With no proof and Teresa as the only eye witness, the trio points their Harleys toward the annual bike rally in South Dakota in hot pursuit of the real killer…

Her life in jeopardy, AJ and Pax become Teresa’s fierce protectors. But a past trauma keeps Teresa guarded, unable to trust them–until AJ and Pax uncover her secret and vow to do anything to help her heal. And in their arms she discovers a sensual desire that knows no boundaries, a passion strong enough to overcome her tragic past and awaken a force that brings both men to their knees.

Danger may temporarily bind the three together, but it’s their shared passion that will lead them to the ride of their lives: love.

I’m not surprised that Teresa fell fast and hard for AJ and Pax. They were so sweet, patient, and understanding about her past. Unlike the other men she attempted to get close to, they didn’t run away when they found out about the horrendous assault she was still battling to overcome. They stood by her and when she was ready, they let her set the pace in the relationship. What a couple of sweethearts!


Now regarding the assault, I was surprised to discover who was one of her attackers. To be violated in any way is horrific. To find out it was by someone you trusted…emotionally and psychologically devastating.

If you missed the review of “Riding to Sunset” ~ “Nautier and Wilder”, click here to be directed to the posting.