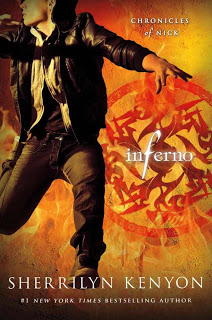 ~ The heat is on, and a new threat to humanity has risen…
Nick has his driver’s license and he’s not afraid to use it. But turning sixteen isn’t what he thought it would be. While other boys his age are worried about prom dates and applying for college, Nick is neck deep in enemies out to stop him from living another day. No longer sure if he can trust anyone, his only ally seems to be the one person he’s been told will ultimately kill him.
But life spent serving the undead is anything except ordinary. And those out to get him have summoned an ancient force so powerful even the gods fear it. As Nick learns to command and control the elements, the one he must master in order to combat his latest foe is the one most likely…

I love SK dedicated a series to Nick so we can watch him grow from a awkward teenager to Mr. Badass.

In book four, fans will be clued in on what and who Koda really is.

Adarian, Artemis, Simi, Ash, and Kyrian will have their “screen time” and be prepared for many shockers such as the ending. What a cliffhanger!!

Before I end this review I want to speak about Grim. He was a freaking hoot. Yeah, I never thought I would say that but he was. Him as a germaphobe was hilarious. Yup, you heard me right. He’s a HUMUNGOUS supporter of hand sanitizer!